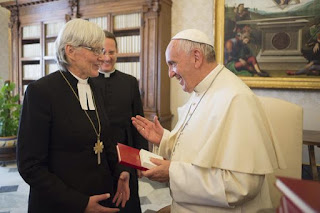 The Ultramontanists will argue that these are mere "ecumenical gestures," as opposed to doctrine enshrined in praxis. I fail to understand the difference. If the Roman church believes that women's ordination shouldn't take place, why countenance it in the Vatican, of all places? If the pope had a spine he'd summon his Cardinals and Swiss Guards about him and order these women out of the old Papal State as an affront to his dignity. Just look at them! Hair unkempt and uncovered, dressed in men's clothes. Pius XII wouldn't have put up with that! But no, in this time of relativism we're so accustomed to the pope's smiling face and all those hearty, well-meaning embraces. He'll be shaking hands with gay lobbyists next. 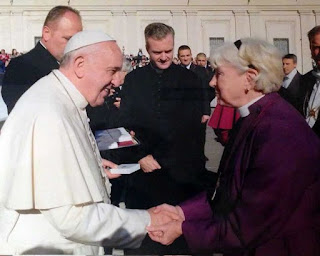 Do you know, it's images like these that add credibility to the Sedevacantist position. "Neo-Modernist Rome," and all that. In fact, of all strains of traditionalism I have a slight respect for the Sedevacantists (that is not reciprocated, I assure you!). Their arguments are all wrong but at least they understand that Rome itself is a stumbling block and must be reformed or restored in some way. To that position I would add that these images are just another example of the constant tendency of the Papacy throughout history to have its fingers in every pie. It just wouldn't do to turn the trendy Lutheran clergywomen out, would it? After all, what is doctrinal integrity compared with a photo opportunity? And we're to believe that Rome is the "true church?" Don't make me laugh!
Posted by Patrick Sheridan at 9:00 am
Email ThisBlogThis!Share to TwitterShare to FacebookShare to Pinterest