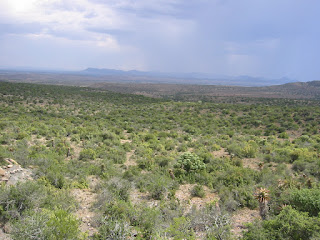 "All you say about the dryness, dustiness, and smell of the satan-licked land reminds me of my mother; she hated it (as a land) and was alarmed to see symptoms of my father growing to like it. It used to be said that no English-born woman could ever get over this dislike or be more than an exile, but that Englishmen (under the freer conditions of peace) could and usually did get to love it (as a land; I am saying nothing of any of its inhabitants). Oddly enough all that you say, even to its detriment, only increases the longing I have always felt to see it again. Much though I love and admire little lanes and hedges and rustling trees and the soft rolling contours of a rich champain, the thing that stirs me most and comes nearest to heart's satisfaction for me is space, and I would be willing to barter barrenness for it; indeed I think I like barrenness itself, whenever I have seen it. My heart still lingers among the high stony wastes among the morains and mountain-wreckage, silent in spite of the sound of thin chill water. Intellectually and aesthetically, of course; man cannot live on stone and sand, but I at any rate cannot live on bread alone; and if there was not bare rock and pathless sand and the unharvested sea, I should grow to hate all green things as a fungoid growth." The Letters of J.R.R Tolkien, no.78.

This letter was written in the summer time seventy years ago to Christopher who was in South Africa with the RAF. Tolkien often said that he wanted to visit South Africa again, even if just to find his father's grave, just as he wanted to see the streets of Artois once more although he hated them during the Great War. But he never did.

Art: Wikipedia.
Posted by Patrick Sheridan at 9:00 am
Email ThisBlogThis!Share to TwitterShare to FacebookShare to Pinterest