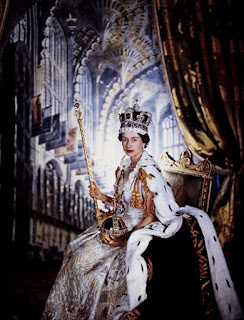 Sixty-two years ago our Sovereign Queen Elizabeth II swore to uphold the the laws and customs of the realm and to maintain the Protestant faith. This might be a given in St George's Chapel, Windsor, but outside the old keep everything has wasted away. During her reign there must have come a point at which Her Majesty said, even if only to herself and to the Duke of Edinburgh, that she could not in good conscience give the royal assent to a particular law passed in Parliament, that such a law (pick one) would go against her Coronation oaths. If she had refused to give royal assent, what would have happened? Would that have precipitated a constitutional crisis? Would the parliamentarians have been outraged that their will (putatively the will of the people) had been checked by an unelected head of state? Would her stand against the ineluctable tide of secularism have made any difference whatever? Would she be here to-day? These are questions that go through my mind as I look at the Order of Service, drawn up in its most antient form by St Dunstan in the 10th century. It is an explicitly Catholic ceremony and the anointing a very Sacrament. The very last, I daresay, in the history of our once great nation.

O LORD and heavenly Father, the exalter of the humble and the strength of thy chosen, who by anointing with Oil didst of old make and consecrate kings, priests, and prophets, to teach and govern thy people Israel: Bless and sanctify thy chosen servant ELIZABETH, who by our office and ministry is now to be anointed with this Oil, and consecrated Queen: Strengthen her, O LORD, with the Holy Ghost the Comforter; Confirm and stablish her with thy free and princely Spirit, the Spirit of wisdom and government, the Spirit of counsel and ghostly strength, the Spirit of knowledge and true godliness, and fill her, O LORD, with the Spirit of thy holy fear, now and for ever; through Jesus Christ our LORD. Amen.


God save The Queen!
Posted by Patrick Sheridan at 2:24 pm
Email ThisBlogThis!Share to TwitterShare to FacebookShare to Pinterest