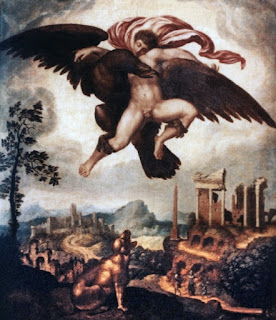 Do you know, only this morning, while sitting in the bath, I was having a conversation in my mind's palace about two hundred years ago with a young man I met in Turin. I imagine it to have been about 1770 because the Revolution in France hadn't yet put an end to the Grand Tour and the city was still French. Anyway, the young man (let's call him Dr Fell) and I were discussing, among other less noble things, the degradation of Oxford and Cambridge, the opera, what we'd seen in the Italian states, and Christian society. He initially professed a nominally Christian morality but as time went on this started to crumble as, living up to his macaroni coiffure (almost two foot high!), in grandiloquent style and affectation he disclaimed that he thought little of marriage and seemed to suggest that mos Graeciae was good for the soul. I wondered if he'd met Monsieur de Sade? I should explain that this conversation took place in an area of my mind where there are mostly images and smells rather than books of lore, lyrics to musick and other sounds so I cannot produce particulars, I'm afraid. If it seems an anachronism then that's because I thought of Dr Fell as a 1920's Anglo-Catholic throwback to the 18th century. The only thing that I can clearly remember saying to him was, "have a care, then, lest you do the will of the Devil in your pride and remember that you are of the Church." I then remembered that my own imagination was not quite as fecund or articulate as all that, and that my admonition was itself a paraphrased Tolkienism. I was inspired by Fr Hunwicke to relate this...daydream, I suppose. These are the things that go around my head in the bath. I ought to have been born in 1731.

Without in any way wishing to denigrate the Word of God expounded so beautifully here but tangential to the point of "lover and beloved," even the paederasts of the antient world understood this and made this application to their romantic attachments. Lover, beloved; top, bottom, with the distinction (by all means a moral one) being so sharp that any blurring or reversal of these rôles would be an unspeakable sin. You might argue, with Scripture as your Witness, that this was nature turned in on itself but at least, unlike the modern Gay Equality rubbish, there was no illusion of normality. Not that I'd know but I suppose it's like bloody buggering public school boys who grow up and get married. I think it was only Nero, who was clearly insane, who thought up "gay marriage."
Posted by Patrick Sheridan at 4:27 pm
Email ThisBlogThis!Share to TwitterShare to FacebookShare to Pinterest