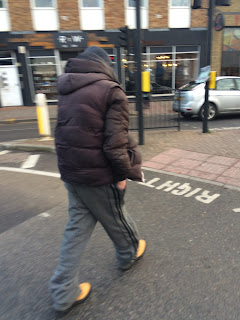 I probably shouldn't have done this but as I stood at the roadside waiting for a green light the other day I fumbled for my phone. You see, standing next to me was Old Smoky, the nickname my father has given to Crayford's local bum. When the green light came, I hesitated, let him walk out first, and then took a quick photograph. We walked to an island; he went the other way (towards the carpark bench he so often visits), I went towards Sainsburys. I watched him walk to his bench and sit down, then I went my way. I have been watching him for some months now. I am fascinated by his routine, his hardiness and almost benevolent countenance. Like Tolkien's "holy tramp" (see his letters, no.89), he reminds me of the statue of St Joseph in the church. One night recently, with temperatures some six degrees below freezing, I was actually concerned for his well being and wondered where he spent the nights.Why, do you suppose, am I so drawn to him? I am not drawn to all the tramps that I have seen. One evening some years ago, at a dingy church in Covent Garden to which I was accustomed to go every Monday, I witnessed, with staggered disbelief, a tramp urinating in a corner. I was repulsed on the nights after a performance at the Royal Opera House seeing an obvious syndicate of con artists dressed in rags and begging for money on the Strand. And I resented being asked for money by a forceful young Slavic woman on Victoria Street. But Old Smoky is different. He never begs. If somebody decides to sit at his bench, he will just move on. He is resigned to his life the way it is and, looking at him, I see less a gangrel and a wastrel, yea more, a fellow traveller to the grave, as I have heard it said.

I think this fascination with vagrants comes of a desire to, in a sense, obviate the kind of personal failures I feel in myself. I couldn't help thinking, as Old Smoky ambled off to his bench, "there but for my father's grace go I!" But there is more; a general interest in Old Smoky's choice of lifestyle, or the circumstances that made that choice for him. Like many of you, I have read George Orwell's "Down and Out in Paris and London," which is a fascinating book. Orwell spent his days among the tramps of the cities, shared in their petty concerns, shared their cigarettes, drank the bitter brew with them in the kips and spikes. At first he was morally outraged at their plight and the food thrown out in the Salvation Army kitchens that could well be "given to the poor," a trite phrase so often invoked by the ignorant and the left, but he was swiftly reprimanded by a more experienced tramp who said that if they made the food too pleasant, the scum of the earth would flock thither in droves. "They're scum, just scum," he said. It's interesting to understand the pecking order among the tramps. This one certainly didn't consider himself to be one in the eyes of God, which reminds me of that stave from Tolkien's "Mythopoeia:"


"Disgraced he may be, yet is not dethroned,
and keeps the rags of lordship once he owned."

And so he carried on. As Orwell says: "His body might be in the spike, but his spirit soared far away, in the pure aether of the middle classes." This seems to be a reflection of the exile we all feel, under the aegis of Original Sin. We may hate the circumstances of our life but, as old Algund, an outlaw, piously hoped in The Children of Húrin, "he may bring us home in the end." I sometimes wonder if Old Smoky feels this. He seems to have all the time in the world for reflection but I don't know how educated he is. Reflection does seem to be an ageing tendency; wisdom, a noble forehead and silver hair, booby prizes all. 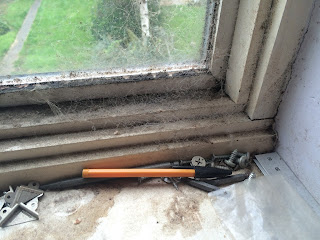 If I boast of anything it would be the finest collection of dust south of the River! I can't remember why those screws are there but the white patch is where I keep my electric razor. I think "cleanliness is godliness" was a Protestant maxim, soundly to be rejected. Personally, I see being over scrupulous about cleaning as a form of luxuria or decadence.

There is also my fascination with Quentin Crisp, a man notorious for shirking the rigours of domestic ritual. Of all people, it was my father who introduced me to Mr Crisp. He said when I was about fourteen or fifteen, half in jest but probably with some conviction too: "you remind me of Quentin Crisp." At the time it just seemed an unusual name. But then I read The Naked Civil Servant at a time when I could read nothing else and it was just the tonic. One of the things that impressed me most about Quentin Crisp was a question put to him in a "World in Action" programme from 1971, even so:

Interviewer: "Quentin, you told me about an argument you had with a drunk in the street, and he said: 'you mean you go with men for money?' And your reply was: 'well, possibly!' Does that mean that you've been a male prostitute?"
Mr Crisp: "Yes, I've been a male prostitute. And this worries people; prostitution in general worries people. And I can't understand this because, to me, the only excuse that you can find for the disgrace of sex is that there might be money in it! Otherwise, it's a wanton form of self-enjoyment. You know what you know who [pointing up] thinks about happiness. You've got to be able to explain it in some way. But whatever is done for money is sacred."

This encapsulates my own view of sex. But there was also something ascetic about Mr Crisp. In later life, he was chaste; ate very little, never drank alcohol, had no money, no culture, nothing. Another thing that attracts me to Mr Crisp is his cynical, but humorous, view of life. As a friend of his said of a play or short story he wrote: "I wish you hadn't made every line funny. It's so depressing!" It was Mr Crisp who described life in the form of an analogy of a tightrope, which I quoted here. "It will come to an end, and when it does, we shall be free." A lesson for people who enjoy this life, I daresay. It could almost be a roundabout way of quoting St John, "except ye hate the world," and so on.

Also of note, albeit I enjoy them considerably less (most likely because they're women and have therefore a "witch" aspect), are Big and Little Edie, two American socialites who went from riches to squalor, whose lives were documented in a film named for their dilapidated mansion in East Hampton, Grey Gardens. Many people who watched that film probably did so out of morbid curiosity, pity, scorn, or a combination of those things. I watched it out of genuine interest. The ladies lived in a bedroom full of cat crap. They spent their days bickering over trivial things, resentful remembering, singing snatches of 1930's popular musick, and eating ice cream. Meanwhile their many cats defecated over the house, badgers invaded their attic, and the building generally crumbled to ruin around them. They were cut off from the rest of their rich family and, their bickering notwithstanding, needed each other in a very profound way. It's a story of true love, despite wealth, family, influence, even sanitation. I'm sure you can find Grey Gardens (and the recent theatrical remake) on YouTube.

All of these down and outs have lived isolated lives. They have been shunned by most people for one reason or another; they stink, they have a peculiar appearance, pick whichever one you like, it doesn't matter. But like the contrarian, I think there is something sacred about the outcast, the remnant. In some ways, they seem far closer to the Gospel than the crowd, the mob, the great unwashed. I can't help but recall what Christ said about the lion lying down with the lamb. We're all sinners but it seems to me that the ones suffering the worst opprobrium in this life seem the more in need of salvation, and might actually be saved. Perhaps that's why I feel this kinship with them?

Do say a prayer for Old Smoky.
Posted by Patrick Sheridan at 2:49 pm
Email ThisBlogThis!Share to TwitterShare to FacebookShare to Pinterest