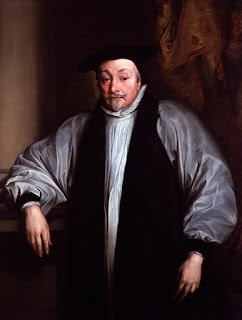 A simple bishop. This painting, bl. William Laud's most famous likeness, is by van Dyck. Of all other van Dyck portraits that I have seen, the sitters have invariably been depicted against a background symbolic of their political and religious values. The martyred Archbishop is presented here as a man of "noble simplicity," as the saying goes; no artificiality, no pretence. And most importantly of all, not a bit of poncy lace in sight.

This is in stark contrast to what I saw in the Chapel Royal at Hampton Court Palace this morning, in which the commemorations of King Charles I (thirteen days too early) were read out by a man not only facing the wrong way but dripping in so much lace ornamentation as to justify almost every charge made by "the godly," that is the Puritans, against the Arminians. Sat on my right was an idiot reading from a 1961 breviary with a prayer card of John Henry Newman (which itself raises a number of liturgical and ecclesial questions), and on my left in the sanctuary was being simulated a popish high Mass, which we were told was in accord with the 1637 Book of Common Prayer. Maybe there are a few elderly Tory monarchists there who fell for the line but I wasn't one of them. Who do they think they're kidding? The 1637 Prayer Book contains a fine anaphora, which wasn't used, and neither the rite nor the aesthetic would have been familiar to Laud or to King Charles. But for the superb sermon, preached by the Vicar of Hampstead, I went away thoroughly peeved.

Two things made me laugh to-day. One was a "tradition," putatively dating to the reign of King Charles I himself, of sitting the women on the right of the choir and the men on the left...yes, that does seem rather odd. Before we were allowed entry to the chapel one of the ushers mentioned this tradition and said that any of us young men accompanying young women would do well to split up in deference to that tradition. My comment that few, if any, of the young men in attendance to-day would be accompanied by a young woman was wasted upon the usher, but it made the man standing next to me laugh. The other was when the dean welcomed us to Hampton Court and said that it was difficult to conceive of another chapel in Christendom, save, perhaps, St Peter's in Rome, with so venerable a tradition. I laughed and thought that whether or not St Peter's in Rome was even a church was debatable.

UPDATE: I've just double-checked the "principal objects of the Society [of King Charles the Martyr]," and it's a good job historical liturgical accuracy isn't mentioned as one of those aims because, based on what I saw this morning (and previous years, which I have tolerated with grinding teeth), it's clear none of them give a crap and are more interested in aping 20th century Roman praxis. I mean, if these people asked themselves what King Charles, Archbishop Laud and his contemporaries were trying to maintain, and to promote, in the Church of England they'd probably discover, if they looked seriously, that it wasn't cheap lace and birettas but the high liturgical standard set by the Prayer Book authorised for use at the time. Not that Anglo-Catholics are too fussed about the Prayer Book!
Posted by Patrick Sheridan at 7:13 pm
Email ThisBlogThis!Share to TwitterShare to FacebookShare to Pinterest