I went to Sourozh for liturgy on Christmass. To put it mildly: expecting Miranda and I was greeted by Caliban! I thought, being so principal a feast, that the Metropolitan would be greeted by the clergy at the west doors, there might be two deacons, &c. What actually took place was a "missa cantata," with one priest and deacon, and the Metropolitan turning up to administer communion and deliver a brief sermon, in a tongue not understanded of the people, or at least this person. I checked the cathedral website and it seemed that they had tacked on an episcopal liturgy to the vigil the night before. Almost I departed in wrath but as I had traveled the two hours across town to attend and it was raining hard outside, I stayed, but I made sure not to part with any of my money at the collection. I confided this to a friend of mine who said that Sourozh have been doing this strange "midnight mass" for some years now. It must be some strange new fashion in Moscow, like red vestments on Easter. 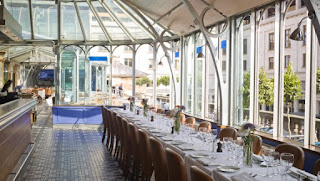 Afterwards I took the Piccadilly Line to Covent Garden as I would fain take my Christmass lunch in my favourite French restaurant. I went into the opera terrace whereupon I discovered the place was boarded up. Using my not-very-Puritan iPhone I looked the restaurant up and it seemed that they had closed in December for a major redevelopment, with no indication that it would re-open at some future date. By now thoroughly peeved and cold, I walked to Maiden Lane. I decided that I couldn't afford Rules so I ended up in an Italian restaurant in Villiers Street. For a weekday afternoon the restaurant was very busy, so I was sat next to a woman in a tracksuit who spent at least half an hour shouting down her phone at someone about the kind of stuff Jerry Springer makes a living of. I asked the waitress to move but that made little difference. She left presently and I couldn't help thinking how expendable such people's lives are. I would have been much better off in Rules.

But it wasn't all bad. When I got home my mother had bought me a hamper. So we had Prosecco with our dinner and lots of sweet things to nibble, and another Christmass pudding. At least I wasn't let down by my family this Christmass.
Posted by Patrick Sheridan at 12:19 pm
Email ThisBlogThis!Share to TwitterShare to FacebookShare to Pinterest