A response to Fr Anthony... 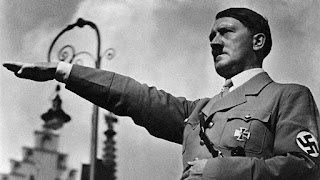 This was going to be a comment on Fr Anthony Chadwick's blog on his latest post but it has grown in the telling and was too bulky to be a mere comment.

Tolkien shared your sympathy for Germany too, father, and said that he had a bitter personal feud during the War against Hitler himself, who bastardised that "noble Germanic spirit." But I have to say there is something dark and aggressive about Germany, and I don't just mean the Nazis. Germany has been an aggressive power since the 1860's, first of all as a pan-German, pietist Protestant nation under Bismarck; then as the imperial power we fought against during the Great War; then as the libertine, elitist, anything-goes Weimar Republic, whose degenerate policies included pioneering in Jewish psycho-sexual innovation (proto-transsexual surgery, legalisation of sodomy, &c); then along comes Hitler and revives a humiliated country, and says things about various things that rather a lot of people then thought. Just as Henry VIII's break with Rome hardly "invented" the spirit of national pride that made it so successful, Hitler's policies were not exactly imposed on an unwilling people (except Jews, who were the greatest beneficiaries of the Weimar Republic). Unfortunately, mobs, crowds, rallies of angry people...well, you know where I'm going.

And we're seeing this to-day. The European Union is a socialist institution. We see this most clearly in policies such as the expansion into poverty-stricken former Communist countries and having to bail out countries like Greece, who, unlike we British, won't work more than thirty-two hours a week. And with the expansion, together with the principle of "free movement," comes mass immigration. Then comes the inevitable spiraling down of wages because a Polish builder (for example) is willing to work longer hours than a British builder, and for much less money. How is this not going to cause resentment among the native people? And that's only the immigrants that work! My mother has seen Romanian men on Eltham High Street who are inebriated bums going through bins; unemployed, unwanted and a waste of space! What right do they have to be here? And if they do have a "right," which clearly trumps the rights of the British people, what duties do they have to their host nation? Because these drunken bums clearly don't want to learn English...

And this resentment, we're told by the metropolitan elite, is gratuitous xenophobia and racism. Remember when Gordon Brown called Gillian Duffy a "bigoted woman" for raising genuine concerns about immigration? That's the kind of sneering condescension people like me face to-day. When a legitimate concern is dismissed as a phobia then the accuser can simply avoid answering the question and dismiss his opponent as an ignorant yokel. What a sham!

And as for Mrs Merkel, another champagne socialist, her utterly daft policy of open doors is going to destroy Europe. Perhaps she thought that an open-door policy would provide a counter to Germany's appalling record of aggression since the 1860's, but, in reality, by destroying the social fabric of Europe, she will have added to that record. She will go down in history as worse, much worse, than Hitler. And she is not alone in championing this self-destruction. There are many MPs in the British Parliament, such as Yvette Cooper and the late Jo Cox who, out of misplaced compassion and moral superiority (or cowardice), are our silent killers. And we vote for them (well, I don't)! And since the candidates who stand before us at general elections are pre-selected by closed committees of elitists absolutely loyal to the "party line," which, since the 1990's, has been pan-Blairism across the political parties (with, from what I can see, similar politics practiced by the political establishments on the continent), and totally uninterested in their constituents, the electorate might as well just be incidental to the whole process. It boils down to politicians seeking the votes of real people whose real opinions and concerns they secretly despise.

But coming back to the open-door policy, to where does this inevitably lead? In twenty years I can see the political class and the working class evolving into the Inner Party and the Proles; the Inner Party being the "democratically elected" leaders, safely cordoned off from the Proles by body guards, heavily armed police, and living in separate communes (true communards), riddled with a standard of living not shared by most, and debating policies in parliament that really only affect them because the Proles have descended into poverty, tribalism, crime, disorder, ignorance and idleness. I imagine sectarian conflict between the Sharia communities of Muslims, and football hooligans. I imagine car bombs, demolition of churches (there would still be cathedrals but these will be for the Inner Party, who come together at certain times for pagan, humanistic services orchestrated by people who dress like Christian ministers, but really aren't). I imagine abortions taking place on street corners. I imagine sex in public places. I imagine waste being collected once a month, with rats and foxes prowling the streets by day. I imagine grim, grey high rise flats that stink of stale urine and cheap lager. I imagine Christ's Name openly scorned. I imagine mass surveillance and identity cards. I imagine toxic fumes rising from slag heaps. I imagine corpses being left to rot. I imagine stabbings and shootings in broad daylight. I imagine blood feuds. It will be Hell.

But there'll still be freedom, and the rule of law, and the glories of a multi-racial, tolerant and diverse society. There'll still be Victory gin, and month-old razor blades. Doubleplus good, eh!

To return to the unhappy present, Fr Anthony raises concerns about nationalism and a rise in far-right politics, racism and so on. I must say I'm not as concerned about that myself. This sort of thing happens when the Left is in charge. The real beast is the Left itself. I can't remember who said it but in Britain there is an inch of difference between the two political parties, and it is in that inch that we all live. Since the Restoration of 1660 Britain has enjoyed a curious liberty, precariously in the balance. George Orwell mentions something like this in his essay The Lion and The Unicorn, where you set up the Nazi Storm Trooper against the hanging judge, a figure almost as savage but as old as the hills and part of the fabric of the unwritten constitution. Of course, that figure no longer exists and in his place has appeared an armed police force, and a detached political class overwhelmingly on the Left, even when they sit on the Right of the Commons chamber. "Compromise" is the word I'm searching for, and there is absolutely no compromise to-day. It is within the parameters of compromise that we enjoy liberty. If there is no compromise, whether to the Right or Left, then one side will be in the ascendancy and the other will be brimming below the surface, ready to erupt at something completely innocuous.

Something needs to change. We're seeing some kind of change in Britain at the moment, but whether for the better remains to be seen. As for change on the continent, what with Austrian elections being re-run for fear of electoral fraud and the rise in far-right nationalism, well...God grant that we can say: "that's no longer our concern."
Posted by Patrick Sheridan at 12:23 pm
Email ThisBlogThis!Share to TwitterShare to FacebookShare to Pinterest