The wilderness of this world... 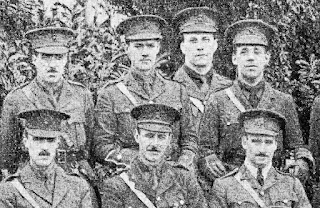 G.B.Smith (second from the left at the back), a childhood friend of J.R.R. Tolkien and member of the Tea Club and Barovian Society, with other soldiers in the 19th Lancashire Fusiliers. All died during the War.

Let us commit to the LORD the most heroic and Christian men, admirable templates for Tolkien's "Samwise Gamgee," who made the ultimate sacrifice one hundred years ago at the Somme; a battle so unutterably tragic and wasteful that I, who have never seen bloodshed, can scarce conceive of it. I chose the title in deference to Bunyan's The Pilgrim's Progress, a work known to most men of that time, many of whom tried to reconcile it with what they saw around them.


"I am going to my Father's, and though with great difficulty I have got hither, yet now I do not repent me of all the trouble I have been at to arrive where I am. My sword I give to him that shall succeed me in my pilgrimage, and my courage and skill to him that can get it. My marks and scars I carry with me, to be a witness for me that I have fought His battles who will now be my rewarder. When the day that he must go hence was come, many accompanied him to the river-side, into which as he went, he said, Death, where is thy sting? And as he went down deeper, he said, Grave, where is thy victory? So he passed over, and all the trumpets sounded for him on the other side."

Eternal rest grant unto them, O LORD, and let perpetual light shine upon them. May they rest in peace. Amen.
Posted by Patrick Sheridan at 6:43 pm
Email ThisBlogThis!Share to TwitterShare to FacebookShare to Pinterest