Wherein is concluded my account of my peregrinatio to the Ionian Islands. 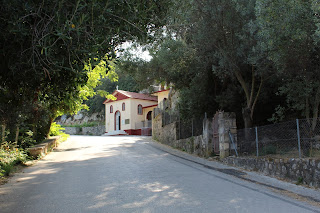 The modest church built into the rock above Lassi.

I returned to the monastery for another look around (and to cool down) but, being alone and in the middle of nowhere, where most people had their own motor cars, I began to fear that I'd be left stranded. Vivi, my friend at the hotel reception, had told me that the bus would come back at 2:30pm. I didn't suspect her of mendacity, of course, but whenever I am alone like this, in the middle of nowhere, without much money, &c, &c I become anxious, and I needed to be reassured from locals that the bus would come back. I found a cheap taverna on the road to Argostoli and took some water and light refreshment with what money I had and looked around at the countryside as I waited for the bus. I thought how beautiful it was, perilously beautiful. When the bus returned (at 2:30pm exactly) I was still anxious because the driver did not immediately turn back, but carried on past the monastery and into the hills. An elderly woman disembarked at a bend in the road, at another Kandylakia in fact, whereupon the driver did a u-turn, and drove back to Argostoli. I breathed a deep sigh of relief and went back to the hotel. 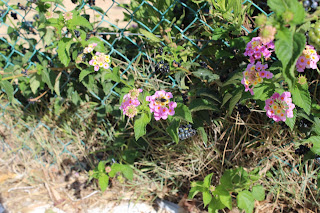 On the road to St Gerasimos' Cave, a wasp.

On Saturday morning, my friend and I went to St Gerasimos' Cave in the uphills of Lassi. When St Gerasimos landed at Kefalonia in circa 1555 he dwelt in this cave for five years as a hermit, praying for and educating the many people that came to him. The cave is up another winding track, shaded at the top by olives and firs but very much exposed most of the way up! We passed blackberry bushes and grape vines on the way to the modest church built into the hillside. It was empty, but open to visitors. Nothing much to report about the cave, save that it was lit by a small hole pointing east and littered with icons. A quick Collect (for Purity), and The Lord's Prayer, and we were off again. My friend and I returned to Trenti's that evening for a last view of the sunset over cocktails. It was, subjectively, the most beautiful sunset we had seen that week; a pale blue vault rejoicing in fire as the bright day sank to slumber to his palace in the West (that's Thomas More). Unfortunately the view was blighted by a family of tubbo's (they had to be British; the Greeks aren't that fat) who spent the entire evening on their mobile devices. My friend, who has a skill for this kind of thing, nicknamed them "the Golightly's," and we both thought how unsociable to spend an evening engrossed in a piece of technology; how philistinistic to ignore the view, and how pernicious Globalisation really is. Not just the working class abroad but the fact that we had seen in remotest Ithaka cans of Coca Cola on sale, and the fact that many of the Greeks spoke proficient English (which, I must admit, spared them my feeble attempts at Greek), and the music on the radio tended to be Western pop music, except for a few cabs and restaurants.Where was the national costume, except as a quaint curiosity aimed at British tourists, who, from what my friend and I could see, knew and cared little about Hellenic culture and history? We saw Greek dancers during the week but they were laughed at, and all those old widow women in black I remember from Corfu in 1993, where were they? Dead and gone, that's where, and replaced by tourists whose fat lives and influence are slowly poisoning the island. May the curse of Babel strike all their tongues till they can only say baa baa, say I. 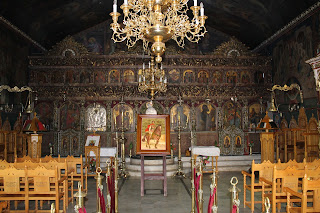 I can't remember who is depicted in that icon but it was his feast day.

On Sunday morning my companion and I went to Divine Service in Argostoli. Just a priest and two cantors, and someone to ring the bell. As parochial, and simple and utterly honest as one could wish, with a natural, seamless quality and a timeless ethos that seemed to transcend the locale and the people (I suppose that just means "catholicity" in a round about way), as though we really were praying in the Spirit and the beauty of holiness, and yet faithful to Tradition as a guide rather than a rule. No rubricism here! Not one of the women covered their heads, as I have seen among the Greeks in London, which I must admit I find irritating. And before you start about such things as slavery being sanctioned by St Paul, let me ask at what point do we cease dispensing with the commands of Scripture as being out of date? Is it at the point of complete negation? Because it seems to me that such things as head covering for women are not as trivial as they seem, and the decline in this godly discipline came about not by ecclesiastical reform but by the ineluctable tide of a culture that long ago dispensed with Christianity; the very tides that brought us multiculturalism and the dogma of equality. Anyway, to return to Mare Nostrum, my friend and I left the church with the Antidoron, and went to the airport. 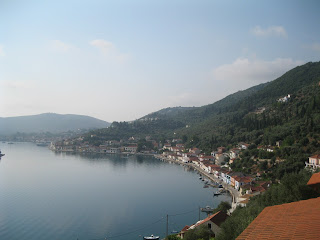 Another view of Ithaka...

Kefalonia and Ithaka are indeed beautiful but they are becoming increasingly like Tenerife and any number of Mediterranean "little Britains." This is shameful. Just like my companion's comment about building a tunnel through Ithaka. What an abominable notion! The most regrettable irony of Globalisation is that the bigger, cleaner, and more advanced things become, the smaller, dirtier and more backwards we become. It is painful to see the Kefalonians subsisting on the sale of tawdry junk to the Golightly's of this world, without, it seems, any moral or intellectual advancement in the buyers. Why go to Greece to burn on a sunbed when you can do that quite easily at home? And why would you do that in the first place? Why would you go to a foreign country and expect the locals to speak your language? Is there any place on earth where reactionary back numbers like me can go without having to put up with the bloody English? The locals all liked me, of course! Vivi, Sofia, Angela, Constas, the lady from La Gondola in Argostoli whose name I can't remember...they all encouraged and corrected my Greek, and were visibly delighted when I said that we shared the same catholick and apostolick faith. I was embraced on Sunday morning when I recited the Trisagion for two of the maids in my hotel who had missed church! I like to think that my companion and I left an impression of the English abroad unlike the others who go simply to drink lager, tan, buy junk and speak English everywhere.

The next time I go, if I go at all, it will, God willing, be in the winter, when there are no tourists. Hopefully to see Theophany. 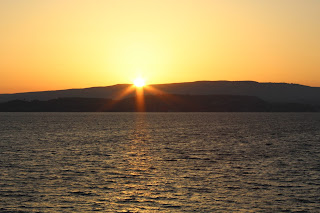 Finis
Posted by Patrick Sheridan at 9:00 am
Email ThisBlogThis!Share to TwitterShare to FacebookShare to Pinterest