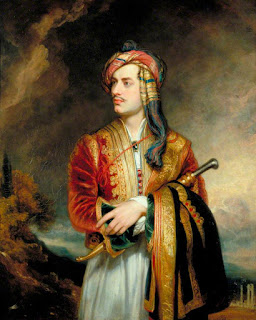 Lord Byron, most famous of Philhellenes, in Greek costume at the time of the Greek War of Independence. Byron landed at Kefalonia in 1823 with money, medicine and arms for the Greeks in their struggle against the Turks.


As promised, an account of my trip to the Ionian Islands, part I.

I went with a companion this time, that is someone who could stand my company, to Kefalonia. We arrived on Sunday 3rd July (new style) at around 2 o'clock local time and went to our hotel in Lassi. Tired from the flight and unused to the heat, we decided to stay in the village, have some lunch, and buy some tea and milk for our room, and generally dossed around. We went to a cocktail bar in the evening called Trenti's which has a beautiful terrace looking west over the bay. It was a delight to watch the Sun go down beyond the hills as the stars kindled overhead, and I was anxious to try the bar's signature cocktail again, which I remembered from last year: a mixture of Vodka, Passoa, orange and pineapple juice. Four of those on a hot evening was quite enough! 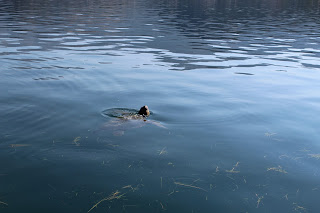 On Monday my companion and I went to Argostoli, the island's capital. We went first to the quayside where the local fishers process the morning's catch because last year I learned that Caretta caretta, the only species of sea turtle native to the Mediterranean, feed there every morning on the fishy offal thrown overboard by the fishermen. At first, as we walked along the quay, we saw nothing, then suddenly Look! my friend pulled at my sleeve as a turtle came to the surface of the water for a puff of air and swam back down again. We followed her (I assumed it was female) as she swam by the boats, and she was joined by another, as well as many a school of small fish. Other than the fishermen, and two young ladies who were clearly conservationists, my friend and I were entirely alone. Where were the tourists, I wondered? Looking for tourist shops, or other tourists? How strange that here was a local miracle and my friend and I were alone. It was the same last year. We watched the turtles for about twenty minutes as they fed (and fought!) until we were conscious that the morning sun grew too hot for our fair skin and we decided to get our own breakfast. 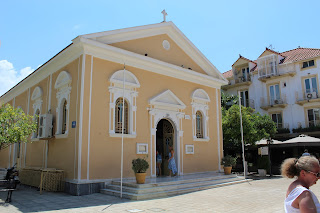 We broke our fast at one of the restaurants in the town square. I had toast with local marmalade, a savoury bun with sesame, drizzled with thyme honey, Greek coffee and peach juice. My friend had sausages and fried eggs with a kind of butter sauce, and tea. We sat talking for an hour in the shade of the plane trees of the square, ordered more coffee, when my friend said that there was a Muslim woman crossing the square. I said: "are you sure it's not a nun on her way to the bus station?" "See for yourself," said he. Well, I was aghast! Coming towards us was a young woman in a white hijab pushing a pram. Here, in heavily-Christian provincial Greece, was an infidel in our midst. I noticed that the locals stared at her in an openly unfriendly way. I didn't blame them, although I felt rather sorry for the woman, and wondered where her husband was. I also wondered what on earth she was doing there. Was she on holiday, like my friend and me? If so, what did she expect to see or find in Greece? There are no mosques, and, unlike here in England, the local shops won't sell halal meat. I thought then that it would do her the world of good to visit any of the local churches. So, I expect, did the Greeks.

On Tuesday my companion and I took the ferry from Argostoli to Lixouri, on the west side of the gulf of Argostoli. Unless I am quite mistaken, there isn't much to see in Lixouri other than the same junk shops we saw in Argostoli but we did visit the Monastery of Kipoureon, the residence of one elderly monk. A char woman sitting outside the katholikon let us wander about for a bit but we became bored and soon left, returning by ferry to Argostoli for lunch. Walking through the trees in a side street to avoid the sun I spotted a small green lizard, which soon disappeared into some foliage. My friend, who didn't actually see it, guessed it to have been a species of rock lizard. 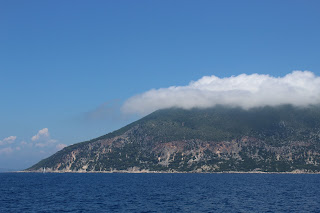 The only cloud we saw that day. Aetos is to the right of this promontory.

On the morning of Wednesday we were picked up outside the hotel by a coach to take us to the legendary Kingdom of Ithaka on a ghastly one-day tour. We were driven through the Omala valley, brimming with orchards and vineyards, through winding mountainside roads to the seaside town of Sami, from which the ferry took us to Ithaka. It might have been a combination of slight hangover, the heat of the mid-morning Sun and the ceaseless up-down motion of the Ionian waves, but I felt rather sick and, unlike last year, did not go out to the deck to view Odysseus' antient home from a distance but sat in the shade with a bottle of water, hoping that I would not throw up. I didn't. We landed at Aetos at just after 10 o'clock, from which the coach took us by a narrow coastal road to the island's capital at Vathy for a two hour stop. It was a long and circuitous route, and my companion, uneasy at the sharp turns along the way, said that the EU might well have built a tunnel from one end to the other. I do not share this view, and think that, in addition to corrupting the natural beauty of the island, a tunnel would totally negate the worth of the journey (or pilgrimage); something I can only compare to the cheap, evanescent thrill a gambler feels at winning the lottery. 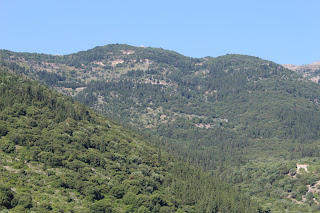 Vathy has a museum of, mostly broken, Classical artifacts. I saw it last year but I went in for my companion's sake. We then went into the church of Christ the Saviour, whose 15th century Iconostasis was miraculously preserved in the cataclysmic earthquake of 1953. A priest saw my companion and I cross ourselves outside the church as we went in but said nothing. Conscious of the time, my companion and I hastily crossed the town to refresh ourselves at a cafe with sorbet and water, whereupon we returned to the coach to move on. We went by another coastal route into the mountains, passing a roadside shrine, or Kandylakia, on the way. The shores outside Vathy were as I imagined the pearly strands of Alqualondë at the noontide of Valinor; as pure and clear as if I looked upon their first Creation, and flowing from green and turquoise shallows into a sapphire sea. O, the paucity of mere words! Presently we came by steep and winding roads to the Monastery of Kathara, a skete overlooking the bay of Vathy. "Mrs Pastry" (my companion's nickname for the plump tour guide with the comical voice) spent the forty five minutes there talking to another char woman, dressed head to foot in black (a rare sight in modern Greece and Spain). As in the other churches I had seen, my companion and I were greeted by the Byzantine double-headed eagle as we went in, and I prayed for a return of the Emperor before the Icon of Sts Constantine and Helena. As I had done last year, I climbed to the top of the belfry there and looked out to the sea. It was a hot, dusty day so we didn't stay up there for long but the belfry there, standing over a thousand feet above the sea, boasts a panoramic view of the south of Ithaka. Below us to the south we could see clearly the islet in the bay, whose name I can't remember, upon which was built a church and where, on Theophany Even, the sea is blessed using the old Greek rite. I'd like to see that.

End of Part I.
Posted by Patrick Sheridan at 9:00 am
Email ThisBlogThis!Share to TwitterShare to FacebookShare to Pinterest