The most complete map of Ithaka I could find in Google Images. The island has an area of about 38 square miles, and is mostly mountainous. For me it remains the jewel in my memory of Greece. It is a paradise.

The second part of my account of my personal Itinerarium to the Ionian Isles. 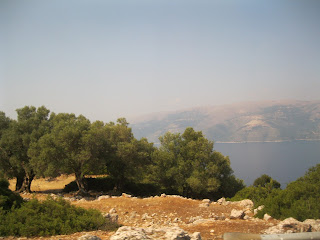 We left Kathara at 2 o'clock and drove down the mountains along the coast. Along isolated, little-used country roads with few anti-crash barriers, it was not encouraging to see a rusted car wreck, overgrown with weeds, over a gorge outside Agios Ioannis. Our tour guide conspicuously did not point this out to us, neither did she say that there are, in fact, no hospitals on Ithaka. I told my companion this, who chose before we set off to give me the window seat. Presently we came to Stavros, and I was desirous to see the church again, but the coach didn't stop so "Mrs Pastry" (I wish I could remember her real name) told us that we would stop in the town on the way back. Through a countryside rich with an abundance of olive groves, cypresses, almond trees in blossom and wild flowers, we went on our way until we could see the sea on the other side of the island, washing the shores of Kioni. At Kioni the coach stopped at the top of the town because the roads were too narrow for him to go further downhill, so we had a pleasant walk past many a tended garden to the seafront. We had a lunch of seafood linguine and local wine in a charming little restaurant by a stone beach with a spectacular view of the sheltered bay, where the harbourage was good. A man was snorkeling in the bay. Our waiter told us that he was 80 years old and had been doing so for many years! It was here that my companion came up with our tour guide's nickname. We were both amazed that on such a hot day this plump lady could polish off two generous meat pies in ten minutes; hence the eponymous "Mrs Pastry." 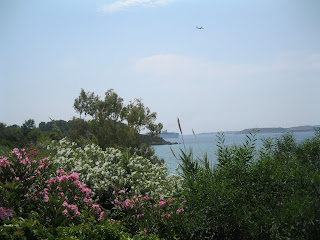 We went back uphill to the coach after lunch, passing another one of those little green lizards basking on a flint wall covered with dry olive leaves. It soon disappeared. The coach then took us back to Stavros, where we had precious little time to explore. My companion and I went into the church of St Joachim the Ithakan, whose silver reliquary is decorated with precious stones. We did obeisance to him and then went to a cafe to sample some of the home-made ice cream. I tell you, when you have the real thing, you can no longer stomach shop-bought stuff. Or I can't. 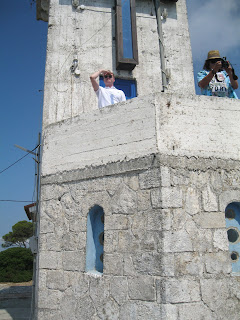 I told you it was a ghastly tour...

We were summoned to the coach at last, and that was the end of our tour of Ithaka. By this time it was after 4 o'clock. Naturally, I wanted to see more of the island but for that we would need a hire car, and my friend (the only one of us who can drive) was put off first by everything on the wrong side, and the rusted old car confirmed his fear that hiring a car would lead to disaster. We saw goats running in the hills on the way back to Aetos but I fell asleep on the coach in Kefalonia and woke up as we reached Argostoli. It was a taxing day. I just wish I could have done a bit more walking. There is more to trees, as Treebeard can tell you, than the sight of them from a coach, and those splendid hills are full of them. 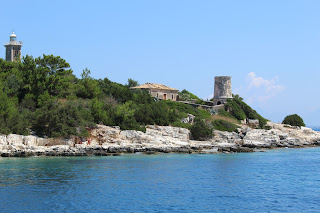 A ruined Venetian lighthouse north west of Fiscardo. On the left is the new one.

On Thursday we were picked up by another coach, and another tour guide; this time to take us on a boat tour of the island. We drove again through the fertile Omala valley, this time to the port of Agia Effimia, south east of Sami, where we boarded the "Romantika II," a cruiser. We sailed to Fiscardo, a town whose name is derived from Kefalonia's almost forgotten Norman heritage. It was Robert Guiscard, the man who destroyed Byzantine rite and rule in southern Italy, who died there in 1085. I found an Icon shop in Fiscardo, from which I bought an Icon of the Crucifixion, hand-written (graphia) in egg tempera and gold on wood. I was hard-pressed to find decent Icons in Kefalonia. Most of them were cheap lithographs aimed at tourists, the vast majority of them depicting the island's patron saint, St Gerasimos. We left Fiscardo and sailed north and west around the tip of the island. The sea became "rough," in the estimation of the boat's captain, and we had to abandon our aim of reaching Assos (which boasts one of the most beautiful beaches in the world) and go to a beach on northern Ithaka instead, which was a disappointment to say the least. I suppose it was another case of "health and safety" gone mad. If the captain thought that that was rough he should try the Irish Sea between Scotland and Belfast when everyone on board is sick! Otherwise I can think of nothing more to say about this mostly-wasted day. Standing at the prow of the boat as the white spray gushed up, and the contrary winds blew, was exhilarating, and the captain's son was nice to look at, but this day out (my companion's idea) was uneventful, and a lot of waiting around. I shan't be doing that again. 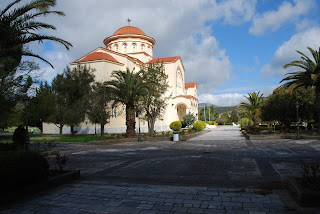 The katholikon of Agios Gerasimos. I did not take pictures here. I found this on the Greek Wikipedia entry for the monastery.

On Friday morning my friend and I went to Argostoli, he to do his own thing (whatever that may have been), I to catch the 10:30 bus to Agios Gerasimos, the most prestigious monastery and the centre of religious life on Kefalonia. Agios Gerasimos is in the midst of the Omala Valley, in the foothills of Mount Ainos. It was founded by St Gerasimos (1509-1579), of the dispossessed Byzantine Notaras family, in circa 1560/61. Much of the monastery, including the katholikon, was destroyed in the devastating Ionian Earthquake of 1953. The katholikon was rebuilt soon after but I thought was rather ugly, too modern and "light" for my taste (I prefer dim churches to churches where you can see all the dirt, even if there's none). The small conventual church of the Panayia, with its impressive Iconostasis was far more welcome. It is here that the relics of St Gerasimos himself are interred in a silver casket, on which images from his life, including his own falling asleep, are carved with considerable skill. I bought a prayer rope from a nun in the narthex of this church, and went in, and out. I walked through one of the monastery's many gardens, past wells dug by St Gerasimos himself; past the nuns in straw hats with their watering cans and baskets who paid me no heed as they tended the shrubs and flowers that grew there in holiness. 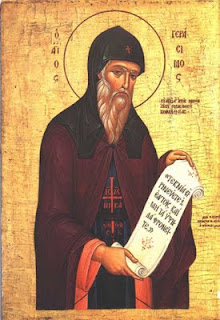 Presently the bells of the campanile rang out and I turned to see people going into the church of the Panayia, so I went back. The priest who had been sat outside with his prayer rope had put on his Epitrachelion and began a chant which I interpreted in my mind (based on frequent repetition of "Yerasimon," and "anesti") as a kontakion in honour of the saint, as the reliquary was opened for veneration. The priest had one key to the reliquary, an elderly nun (the abbess?) had another. St Gerasimos was there in the flesh, incorrupt, beneath a red pall embroidered with gold. There was quite a queue to venerate the relics. Upon reaching the front, I presented the nun with my newly-purchased prayer rope, which she took and crossed three times over the body of the saint and gave back into my hand. I then kissed her hand and venerated the saint, and left. I drew water from the well to quench my thirst and turned past the katholikon, down the steps to the roadside. The bus wasn't scheduled to return until 2:30pm, and I think the time then was about midday, so I turned left and walked to the Robola Winery. 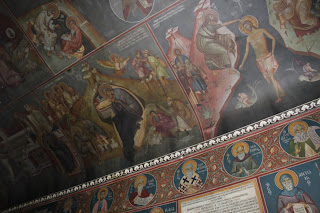 Icons from St Spyridon, Argostoli. This photo was taken on Monday, if I remember rightly.

The Robola Winery is about half a mile from Agios Gerasimos, and all uphill. I passed another Kandylakia on the way, a welcome reminder to the Greeks, and to tourists like me, even if they bewilder the rest of the world. I paused, crossed myself and thought of Christian as he stood before the Cross as the burden fell from his back, and began to tumble. I carried on. There isn't much to see at the Robola Winery but I would recommend "San Gerasimo" (described there as the "full expression" of the Robola grape, which grows high on the slopes of Mount Ainos where there is less rain, and more sunshine). I wondered why they called it "San Gerasimo," rather than "Agios Gerasimos," but then I thought that perhaps it was easier to pronounce. Who knows.


End of Part II.
Posted by Patrick Sheridan at 9:00 am
Email ThisBlogThis!Share to TwitterShare to FacebookShare to Pinterest