The ''development'' of doctrine... 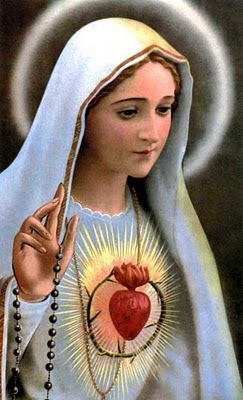 ...and devotions, if you like. Those of you looking for a thorough treatise on the subject will be profoundly disappointed. I only ask questions on this blog; I am not the infallible Fr Z after all.
Fr Hunwicke has a very well-thought-out post about Papal Infallibility and the inerrancy of the Church on his blog, which I encourage readers to have a look at. I can't say that I agree with much that he says, but he's the sort of chap that in spite of all that one still loves to hear (or read) it. He says that the Roman Church subsists negatively, clinging to old traditions and remaining a strong bastion against novelty...I wonder...this is the exact opposite of what I have thought recently (that the modern Roman Church is a church of half-remembered traditions mingled with novelties and centralized bureaucracy), but I used to think along similar lines. The fond notion of the ''development of doctrine'' (and devotions) comes up here I think. For it seems to me that post-Schism developments in doctrine and devotion in the West have been one long series of reactions against things. The Elevation of the Sacrament during the Canon, for example, was a reaction against a heresy about the Real Presence. Devotion to the Sacred Heart can be said to be compensatory in the minds of simple people for meditation upon the mystery of Christ's whole Person. A priest once told me that in these developments he discerned the working of the Holy Ghost. I have reservations about some of them, and I would ask whether negative reactions and developments have any intrinsic worth because of their reaction and negativity?
I have never been quite able to understand the theory about the ''development'' of doctrine. It seems to me to be dangerously close to the very thing Traditionalist Catholics froth at the mouth about - Modernism and heresy. I have had the concept explained to me before - development in insights, the Church discovering new ways of explaining [away] doctrines etc, but perhaps this rustic Hobbit living too close to the Old Forest has missed something. My view (which was also the view of the Fathers) is that nothing can be both new and true, and I personally see no better way of casting odium on the Tradition of the Church than by fondly supposing that you, in modern times, see things more clearly than the Fathers, or the medieval theologians. Did St Bede, who experienced no Great Elevation during Mass, believe in the Real Presence less than me? Would any saint from the Early Church, given a time machine, walk into a modern Catholic church and recognize anything? Statues of the Sacred Heart of Jesus, Our Lady of Lourdes clutching beads, side Altars a plenty...not to mention the Sacred Liturgy. They might, if they went to the Old Roman Rite, recognize many aspects of the Faith, but not so if the Mass were celebrated in honour of the Immaculate Heart of Mary, or the Chalice were denied to the congregation...
Was the consistent denial of the Chalice to the congregation for a thousand years a positive development, in spite of seeming fair motives? Such developments the Second Vatican Council sought to correct, but how pear-shaped it all went!
Posted by Patrick Sheridan at 1:10 pm
Email ThisBlogThis!Share to TwitterShare to FacebookShare to Pinterest

New comments are not allowed.