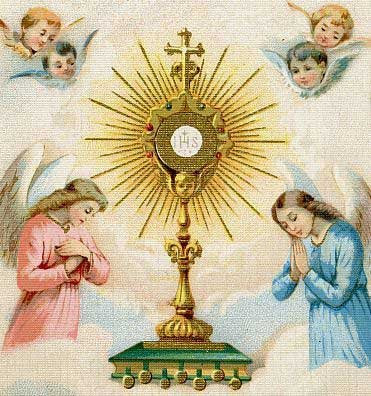 The Sacraments were not ordained of Christ to be gazed upon, or to be carried about, but that we should duly use them. And in such only as worthily receive the same, they have a wholesome effect or operation: but they that receive them unworthily, purchase to themselves damnation, as Saint Paul saith. (The Thirty-Nine Articles of Religion).

Other than shopping (which I can no longer afford this month) another favourite pastime of mine is complaining. A few questions here: Mass coram Sanctissimo was abolished in May 1967 (rightly - it's modern and quite ridiculous), see Eucharisticum Mysterium for the general gist of it. So what authority do Traditionalist parishes look to for having Quarant 'Ore? My guess would be Summorum Pontificum...yet Summorum Pontificum specifically designates the ''liturgical'' books of 1962 to be in force, that is, the only canonical ''Extraordinary Form'' of the Roman Rite. So I would hope (though I wouldn't hold my breath, knowing the parish I have in mind) that Traditionalist parishes would, if they looked to the Motu Proprio as their raison d'être, that they would stick rigidly to the liturgical books of 1962 in the liturgy of the Quarant 'Ore -I have such things as no Last Gospel, Benedicamus Domino, no Credo in the Missa pro Pace etc in mind here. Of course if they followed pre-'62 rubrics they would be just as disobedient as the avant-garde liberals they look down their noses at...for being dissonant...

Of course this opens up a floodgate of other questions pertaining to Canon Law and Liturgy here...if Eucharisticum Mysterium abolished Mass coram Sanctissimo, why would Benedict XVI want to render that previous legislation void by promulgating Summorum Pontificum? It is too reminiscent of Big Brother for me, you know O'Brian's discourse about Doublethink and pulling out truth and lies out of oblivion just so long as they are necessary, or convenient, for the Party. If it suited the S.R.C to abolish Mass coram Sanctissimo 40 years ago it must have suited Benedict XVI's purposes to bring it back from oblivion. And which legislation do we follow? It just seems to me that legislation from on high in the Catholic Church is rather tenuous and not worth really taking seriously. Clearly Trads don't bother - but like to think that they do because it suits their purposes, that is, feeling all smug and superior to the Modernists. I'm just me, and I enjoy ridiculing both their tastes - because I think that neither does anybody any favours. The revival of a more holistic and traditional liturgical theology and Tradition in the Roman Church cannot be achieved by recourse to six altar candles and a crucifix, or gradines, or polyester lace cottas anymore than it can be achieved by recourse to the liturgical books of 1962. It ought to be a grass-roots endeavour; drink the health of the Roman Pontiff, the great Patriarch of the West, but don't take any notice of him - he has clearly failed. But be honest about it...
Posted by Patrick Sheridan at 1:21 pm
Email ThisBlogThis!Share to TwitterShare to FacebookShare to Pinterest