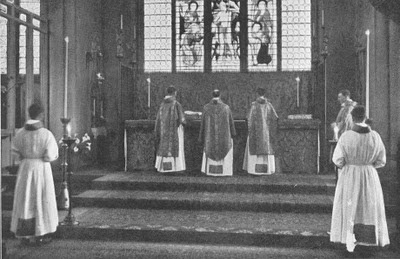 The blogger Ex Fide has a very good post on the subject of High Churchmanship and Anglo-Catholicism in the Church of England. Do go over and have a look. These movements began in the Anglican Church in the middle of the 19th century, and evolved out of the Tractarian Movement. They were essentially endeavours to revive a more holistic and catholic tradition within the very protestant Church of England. Few of the men involved, in either school, as my learned tutor at Heythrop counselled me, went down Newman's path. The High Churchmen sought to imbibe Prayerbook liturgy with Sarum ritual, whereas the Anglo-Catholics sought to emulate the contemporary Roman Church in her customs and liturgy (in effect giving up that which was good, wholesome and traditional in the Book of Common Prayer for the latest Roman fashion - lace cottas and Roman cut vestments for instance); probably because of some false idea that Rome is home, or the S.R.C is a good thing. There are obvious merits in both these schools. On the one hand I admire the historical and more holistic understanding of the relationship of the Prayerbook to the historic family of Rites native to this country* (in a certain sense applying a kind of hermeneutic of continuity to the much-watered-down Prayerbook). I must say I find apparelled albs with amices, Rood Lofts, Chancery Screens, tunicled Crucifers etc very impressive, and more conducive to worship than lace cottas and the big six. However very often the High Churchmen were very Protestant theologically, and it is fundamentally wrong to love schism for its own sake. The Anglo-Catholics believed in the Branch Theory, conceiving themselves related remotely to the Roman Church and subject spiritually to the Bishop of Rome - real ecumenists. I am in great sympathy to the Ecumenical Movement, it is a worthy ideal. However they erred in their zeal for everything Roman. It is praiseworthy to laud that which is good and venerable in the ancient Church of the city of Rome. But it is not good, yea it is damnable, to follow that Church down her path into the abyss; trusting to the Orcs of the S.R.C and the infallible Pope as they shamelessly cast off that venerable Tradition.
What would I have? I would have things as they were in the days of my long fathers of old, in the days of St Bede, before there was an infallible pope, or a Sacred Congregation of Rites, or liturgical books of 1962; before (or beyond?) the days when Popes were not puffed up with virtually blasphemous arrogance; to the days when Liturgy on the Lord's Day meant something infinitely more than fulfilling one's obligation. If I could attend (and possibly serve) full sung Liturgy everyday according to the ancient local Use, and using real liturgical books and real liturgical vestments, then...well, I feel not dissimilar to Gandalf as he gave his history of the Palantir to Pippin on the back of Shadowfax. I do not have my copy of The Lord of the Rings to hand but you'll find the reference towards the end of Book IV, Chapter XI - the last page but one in my favourite edition.
Posted by Patrick Sheridan at 5:18 pm
Email ThisBlogThis!Share to TwitterShare to FacebookShare to Pinterest