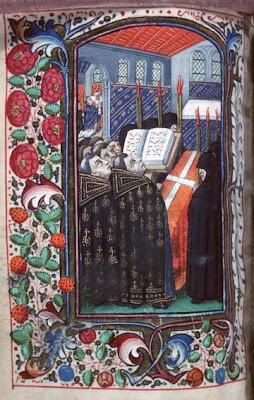 The image I used in the previous post was chosen at random from Google Images, simply because it represented the Office of the Dead. It is very beautiful, and is clearly from an old Book of Hours, the history and nature of which I keep meaning to study in earnest (among other things). Looking closely at it (during the few hours of rest I have before I must return to work) there are some interesting details. In Medieval times funerals were done properly, unlike these latter days of fading and less lore and tradition. The body was brought into the church, covered in a pall (a gold/red one here, ornamented with the Rood token of the Lord), where the Vigiliae Mortuorum were sung by the clerks, in black copes. Around the coffin are six mourners, in raiment of mourning, and between each is a torch, as in the ''modern'', that is, Old Roman Rite custom. In the top left-hand corner...is that someone saying his ''private'' Mass?
Any comments, suggestions are welcome. For example, what are the clerks using to uphold the book? Why is the pall that colour? Why is there a priest saying a ''private'' Mass? Etc.
Posted by Patrick Sheridan at 2:37 pm
Email ThisBlogThis!Share to TwitterShare to FacebookShare to Pinterest