What the Pope said... 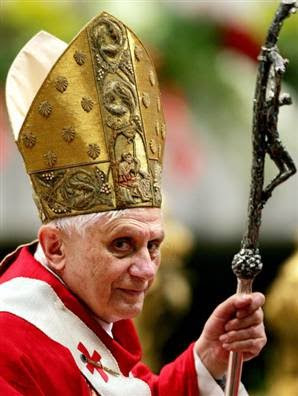 Fr Hunwicke over at Liturgical Notes has a very good, and supportive, post about this condoms business. I really couldn't care less what the Pope said, about anything - any serious student of the history of the Papacy (especially in their dealings with the Sacred Liturgy) must cordially despise the very idea of a Pope (though this is besides the point), or at least know enough about them to not really take them seriously in the first place; but this whole issue has served to highlight the pick 'n mix kind of Catholicism so prevalent in the Church, even in Tradworld (or even especially in Tradworld). Having glanced at the blogs of various Pro-Life Traditionalists (none of whom care to link to little-old-me, even if they know I exist...I must be like embarrassing old furniture around the house to them, a bit like how modern Catholics treat the Genesis Creation story I guess) since the weekend, I have noted that with great care they all counsel us to disagree (respectfully mind you) with the Pope in this matter. Did I read that aright? Disagree? Yes. With the Pope? Yes.
Let me get this straight. Where exactly does the Pope's supposed special charism as the Vicar of Christ to teach infallibly on matters of faith and morals come into all this controversy? The subject of artificial forms of contraception, and indeed homosexuality, involve very serious doctrinal and moral questions surely? So what...is the Pope wrong when he says things flippantly, or are these to be treated as the ramblings of an old man (I have in mind the case of Ossius of Cordova, one of the Papal Legates to the Council of Nicaea, who as a frail, very blind, old man was forced to sign a semi-Arian formula - probably the one impediment to his canonization)? In which case where do you draw the line? What are mere laymen and priests compared with the Vicar of Christ? What right do they have to scrutinize the Pope's every utterance to scan them for faults and want of Tradition? Brigands of the hills! It seems that Pro-Life Traditionalists are flying to the defence of Humanae Vitae in this matter, that highly controversial Papal ruling against the use of artificial contraception, even within the periphery of Marriage. But again, why? You're just flying to the defence of yet another Papal document, and what's the difference? If Paul VI said one thing in 1968, and Benedict XVI says another in 2010, whom do you believe? Is this controversy yet another example of the inconsistency of the Papacy?
It just seems so artificial to me, this whole infallibility doctrine; so contrived, so many cop outs, so many ifs and buts, things being said in (and out) of context etc; it seems the Pope is only infallible when he stands in the right place, breathes a special air or celebrates a tacky New Rite Mass in Cofton Park. The Pope is one minute the greatest thing since sliced bread (e.g: Summorum Pontificum) and then the next a ''private theologian'', not to be taken seriously. Did St Peter define any doctrine infallibly? Did any Pope do any such thing before the 19th century? Hmmmmmmmmmmmmmmmmm.
Perhaps now that the vast majority of Tradworld is in a state of respectful disagreement with the Pope over this matter they won't mind if I, for my part, ''respectfully disagree'' with the Pope in matters liturgical?
Posted by Patrick Sheridan at 1:55 pm
Email ThisBlogThis!Share to TwitterShare to FacebookShare to Pinterest