Folded chasubles...well not quite yet...

When I got to the local railway station this morning a man came up to me and informed me that there were no trains, due to engineering works...I should have checked before leaving but I was in a hurry, having woke up late, so I decided to go to Mass in my parish church instead. I had planned on writing a post about the use of Folded Chasubles, which are older than Advent itself, and had my iPhone handy to take photos at St Magnus the Martyr, but I was prevented from going more's the pity. Someone in my parish had told me that the Holy Ghost had stopped the trains...make of that what you will. Still, there is time yet. I wonder if Trad Catholics think that Anglican Orders are invalid because the folk at St Magnus use Folded Chasubles, which were abolished by the Pope in 1960? If the Magisterium is infallible then earnest desire to revive them in the Church of Rome is surely going against this ''infallible'' Magisterium, which was all wise in doing away with them? Or if this desire is legitimate, and that the abolition of Folded Chasubles was a mistake (or worse), then the Magisterium is not infallible. I lean more towards this interpretation. 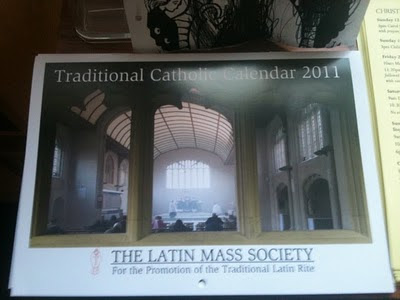 After Mass I went to the back of the church to pick up a leaflet and a timetable of services for Christmas when something else quite extraordinary caught my eye. A ''Traditional Catholic Calendar 2011'' compiled by the Latin Mass Society! It was certainly interesting having a flick through, all those lovely photos of 1962 Liturgy, the last wonderful, traditional, edition of the Tridentine Roman Missal before it all went pear-shaped because of the nasty Council subverting the authority of the Holy Father. I took more than these two but at the risk of being too candid about these misguided people I decided not to include all of them. There were lovely traditional Low Masses in evidence, though, and even Pontifical Liturgy at the Faldstool with tasteful Roman cut vestments. This last one is, of course, the crème de la crème. 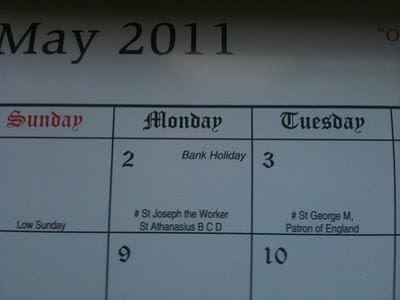 Joe the Communist strikes again! Of course, as the title page above shows, the Latin Mass Society promotes the ''Traditional Latin Rite'' - erm, what is their yardstick of liturgical orthopraxis though? Pius XII, the last true pope - yea more, the pope of the liturgy? No they're not that insane...could it be that this was what Marcel Lefebvre had chosen nearly 30 years ago, and that the only reason ''62'' is such a big deal is because of his obvious liturgical erudition? I'm sorry but if there is to exist a ''Latin Mass Society'' the least they could do is promote something authentic, and for the good of the Church, and not provide people with the pernicious tosh that they do.
Posted by Patrick Sheridan at 4:23 pm
Email ThisBlogThis!Share to TwitterShare to FacebookShare to Pinterest