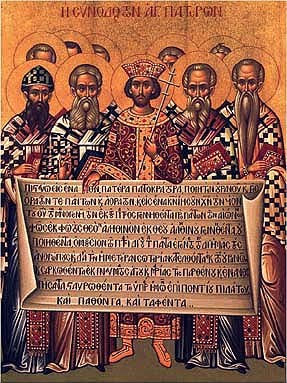 The uttermost choice is before me. To stay put, and abide poor Liturgy (which even among more sensible Traditional circles isn't really all that traditional), the culture (which, incidentally, sickens me), the fundamentally wrong ecclesiology of Ultramontane Tradworld (which isn't quite as Ultramontane at the moment as is its wont, vis the condoms business), the New Kalendar, the eventual canonization of the Antichrist, the acceptance of a set of claims to holiness and apostolicity which clearly belie the last 450 years of sterility and a bureaucratic hermeneutic of Tradition, belief in the ''development'' of doctrine (which entails acceptance of the Papal claim to infallibility - a claim which is entirely novel and contrary to the Apostolic Tradition) etc. Or to depart and wander hopelessly through a series of foreign churches, and who knows where that may lead me?
Perhaps my time as a Traditionalist can be compared to waiting in an ante-room leading to something greater. A lot of Anglicans of my acquaintance feel this way about their church, which has clearly departed from even their own wholesome tradition in a very serious way. This is a matter of conscience. Trad Catholics may sneer at conscience if it is at variance with the Magisterium, though I do not understand why. In conversation with a friend some weeks ago (sadly steeped in a Trad milieu) he had said that he would watch with growing concern the path to canonization of Pius XII, whom he described as an arrogant old queen. An apt description if you're being reticent I suppose. I was rather pleased by this, though disappointed when he added that the day Old Pius is canonized he would accept with filial piety his canonization, as coming from the infallible Magisterium of the Church.

Conscience versus Obedience. Where do you draw the line? I cannot, in conscience, accept or approve of what Pius XII did to the Sacred Liturgy. I just cannot. I am supremely confident that those reforms were both deeply pernicious and wrought great evil in the Church (you can see the signs today). So why must I sacrifice my conscience in this matter in order to appear orthodox to other Trad Catholics? I care not for such pretence of ''orthodoxy.'' Indeed I would fain question the whole ''traditionalist'' position if their end to ''turn back the clock'' runs contrary to Papal and Curial decree. There has to be a point where you can look with an objective eye at the dealings of the Papacy with the Sacred Liturgy, step aside from starry-eyed filial piety (just as Fortescue, a man very misunderstood, did during the course of his life), and just admit that the abolition (say) of the Midnight Eucharistic Fast was wrong, utterly wrong, and that there was a ricochet effect - do away with the Eucharistic Fast and you clearly encourage complacency about preparation for the Lord's Day and receiving the Eucharistic Lord into ourselves. Similarly I cannot understand sacrificing one's conscience for the sake of obedience to the Magisterium in terms of the canonization of Pius XII, a man who clearly did great violence to the Church's Tradition. Why would you accept this? Are the marks of a saintly man, dutiful son of the Church, ''Second Sunday of the Passion'' post-'56 fashion, or evening Mass? 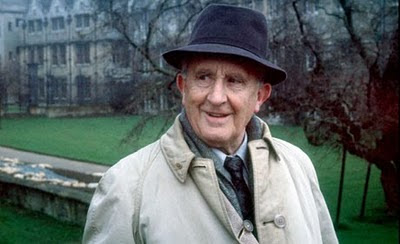 Of course I am just one lonely guy - up against the ''infallible'' Vatican curial system, which regulates orthodoxy by decree and ''Canon Law'', renders abuse Tradition and novelty ancientry. Trad Catholics may pride themselves on the Roman Church's staunch opposition to doctrinal relativism, though this is just circumstantial, just as subject to change where the Pope is concerned as it is among Protestants. The Pope is lord even of Truth in the Roman Church, and can mould the Tradition as he sees fit. Deviation from Papal orthodoxy and you are anathema. I fail to see why, as a Catholic, I am expected to submit myself to the Church, that is, to place my trust in the Pope who has clearly failed to do his job - that is to safeguard and defend the Tradition of the Church. Conscience has no place in the Roman Church.

Though I am in great doubt. Christ plainly did not intend His faithful to only partly-adhere to the Tradition of that Church He founded, to believe some of her teachings but not others, to sneer at most of her liturgy. I always imagined that putting on Christ entailed steeping oneself fully in the Tradition of the Church, which was upright, worthy to be followed and thoroughly orthodox; with the Sacred Liturgy, the traditional prayer of the Church, being offered by all the Church, by all Christian men everywhere, according to the same received ethos and praxis, and rising up to God as an evening sacrifice, as sweet incense to perfume the heavenly court. This is not so romantic as you might think, and this was indeed the case once upon a time, with wholesome Liturgy radiating from all the churches of this world. Now what do you find? Banal 1970s hymnody, ICEL mistranslations of an impoverished Missal, a plethora of untraditional Eucharistic prayers, the Propers being left out - not to mention the countless aliturgical abuses such as Mass facing the people. Tradworld is hardly better - with Low Mass, Rosary Crusades and Benediction being the order of the day. Where am I to go in the Roman Church for decent Liturgy? The answer is, of course, that I would look in vain...

''A shadow passed over Saruman's face; then it went deathly white. Before he could conceal it, they saw through his mask the anguish of a mind in doubt, loathing to stay and dreading to leave its refuge.''

I am sick to death of cheating myself, of trying to employ Orwellian Doublethink in terms of my faith, only half-listening to my own conscience. ''The Church is infallible, the Church is never wrong'' I kept assuring myself as I felt sick to my stomach (and trying against hope to suppress a fast-rising wrath) to witness recently a celebration of a pseudo-feast in a Traditionalist parish. Years ago I tried to conceive of my reaction if I became aware beyond all doubt that the Church was wrong, that the Roman Church was not the true church of Jesus Christ as I have always believed. I could not, as I could not conceive of it. Though I was (really) sick recently and wept, having come to the irreversible conclusion that the Roman Church is evidence of a gigantic fraud, and that I was led astray by her, my conscience and right thinking lulled to sleep by false hopes and want of religion. How do you think it feels when the magnitude of your own folly and ignorance is revealed, though you were long aware of it, but too scared to actually admit the truth? I am tired and bitter now, finding little consolation in that which of old gave me comfort. Even Tolkien, that kindly intercessor who has kept me in the Roman Church beyond all hope, said that the Church more often felt like a trap than a refuge in the 1960s. Though where could he go? Where can I go? I feel homeless, orphaned and utterly bereft.

O Lord, seeking me Thou sat exhausted; Thou hast redeemed having suffered the Cross; may not so great a labour be wasted...
Posted by Patrick Sheridan at 6:16 pm
Email ThisBlogThis!Share to TwitterShare to FacebookShare to Pinterest