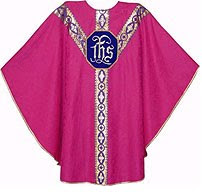 Today, as you can read on The Tridentine Rite blog, is Gaudete Sunday. There is a lightening in the penitential mood of the Advent Season today, and the Ministers of the Mass may wear violet Dalmatic and Tunicle rather than Folded Chasubles (I had planned on writing something about the history of folded chasubles, but since some would question my knowledge based on a simple human error of fact, I have decided against this), though since about the 18th century, where it be the custom, Rose colour vestments may be worn. I must say that I have never actually seen tasteful Rose colour vestments in the flesh before - and for this reason alone would argue for the use of violet Dalmatic and Tunicle over hideous vestments. But what constitutes the colour Rosacea then? Certainly not the sickly bright pink hue which passes for Rose colour in Traddieland, which probably dates no farther back than the mid 20th century - how traditional! I expect that this is more complex than simply saying that any single colour is ''Rose colour'', and a contrary shade isn't (roses come in many colours), and probably entails something of the history of dying. I personally lean more towards a more purple shade of pink, or would simply use purple vestments (a favourite colour of mine) with a pink cruciform or embellishments - which would encompass the memory of both the colour of the Season, and the lighter mood of the Day.
However traditional the use of Rosacea is, Gaudete Sunday is still an excuse to wear pink and drink pink Port. It wasn't for naught that I bought my mother a pink cashmere scarf for ''Boxing Day''. I wanted one myself but when I looked at it I had already spent well in excess on myself.
Posted by Patrick Sheridan at 3:21 pm
Email ThisBlogThis!Share to TwitterShare to FacebookShare to Pinterest