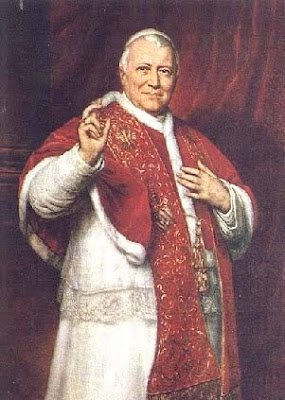 A reader posed this cogent question in my last post. It seems apposite, though I sometimes wonder whether I should start bashing my head against the wall when trying to remonstrate with adherents of the '62 books; that what they take for Tradition is in fact a lie made up by a team of scholars who mistook innovation for pastoral expediency - that is if you put that much faith in them in the first place. I tend to view anyone who mercilessly pulls down the Tradition of the Church as an Orc in the service of the Dark Tower, but that's just me.
The short answer is that the term ''Old Rite'' is generic and rather arbitrary. I don't imagine for a second that there was a ''golden year'' for the Roman Rite, where what came before was not ''developed'' enough in the organic sense, and what came after was innovation and ruin. There is no such year, nor is going back to a fixed year expedient in the pastoral or liturgical sense. It is actually Protestant, and serves merely to place Tradition in permanent regression or stasis. I tend to view the Council of Trent and subsequent Papal dealings with Liturgy in a similar sort of ''protestant'' sense. Trent froze the Tradition of the Church, where before there was imagination and variegation at local level. What came after was sterility and centralization. The idea, propounded by the encyclical (heralded by Traddies as a perfect synthesis of Liturgy) Mediator Dei, that one man, however exalted his office, has the sole right of regulating, approving, ratifying, even abolishing the liturgical texts, is very alien to the Tradition of the Church, set apart as an entity independent of the Papacy. Yes ancient popes such as St Leo composed Collects, and these are praiseworthy, but ancient popes didn't take it upon themselves to radically change the liturgical rites. This is the yardstick of Tradition. The question posed by some adherents of the '62 books: ''If the liturgical books of 1962 aren't the 'Old Rite,' what is?'' is altogether stupid. Do they imagine that there is a single Old Rite and a single New Rite? If so, then the 1970 Missal is an ''old rite'' just as much as the '62 books; taking into account the manifold changes to the Novus Ordo since 1970 (the abolition of the Subdiaconate being noteworthy). There is no dichotomy between old and new, and I rather think that people who seek to make such a dichotomy know little about Liturgy or Tradition. There is Tradition, understood as received orthopraxis faithfully passed on from one generation in the Church to the next under the guidance of the Holy Ghost, and innovation; and just because something has the semblance of tradition does not make it so - to paraphrase the Lord Himself; a whited sepulchre, all clean and fair without, but within full of dead men's bones and all corruption.
To me the ''Old Rite'' would be, as Waugh suggested, the liturgical rites as they existed during the reign of Pius IX (and at that, certainly before the 1850s) - or at least the ''ethos'' of the Old Rite; for authenticity I would also take into account the Urban VIII hymnody and the Gregorian Kalendar. What Pius X and Pius XII did to the Liturgy were the greatest reforms of the Roman Rite in the history of the Church up to the 20th century. Therefore the '62 books are not the Old Rite by any stretch of the imagination.
As I said in the previous post: How can you accustom people to Tradition if what you provide them with is little older than (and in many cases is inferior to anyway!) the stuff you're trying to extricate them from?
Posted by Patrick Sheridan at 1:28 pm
Email ThisBlogThis!Share to TwitterShare to FacebookShare to Pinterest