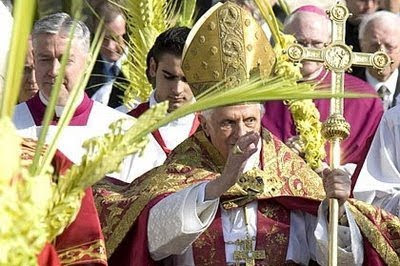 A reader left a comment in my post entitled Bede's World asking whether I had formally renounced the Roman Pontiff and joined the Church of England. I don't quite know what prompted that question, since I don't seem to have said anything indicating that in the post (or elsewhere); but I will say this: I am not now nor will I ever be a member of the apostate Church of England. I consider myself to be an orthodox English Catholic (not Roman, I do not live in Rome) of the Sarum Use. Well I would be of the Sarum Use but I say the 1570 Roman Office and perforce attend Mass in the Roman Rite pre-1962 (far less worthy than the venerable Use of Salisbury). I do not recognise the bishops of the 19th century Italian Mission in this country, if that's what you mean; I am subject spiritually to the lord Archbishop of Canterbury, the only real episcopal authority in this country, whose See goes back to St Augustine, sent by the holy father Gregory of Rome to illumine our pagan forefathers. Of course, like the Italian bishops, I don't really pay much attention to anything +Rowan Williams says. My relationship to the Bishop of Rome is rather complex. He is my apostate Patriarch, who celebrates novel, made-up liturgy in a pagan temple in Rome. I look longingly towards Rome as an exile would look to his ancient home as though it had become an abode of dragons, as indeed Rome has. Rome is the primeval guardian of orthodoxy in the West, though sadly is in schism with that ancient orthodoxy. As a Catholic it is my bounden duty to pray that the Apostolic See returns to orthodoxy and orthopraxis, though I do not see it happening.

So...I am an orthodox English Catholic, and a member of that True Church which is driven into the catacombs by despot Ultramontane pontiffs and their ilk, striving for righteousness and orthodoxy. The photo of the Pope above indicates that he is apostate and in schism with the Roman Tradition; he is wearing red on Palm Sunday and flanked by deacons wearing red dalmatics (though you cannot see them in this close up).
Posted by Patrick Sheridan at 5:08 pm
Email ThisBlogThis!Share to TwitterShare to FacebookShare to Pinterest