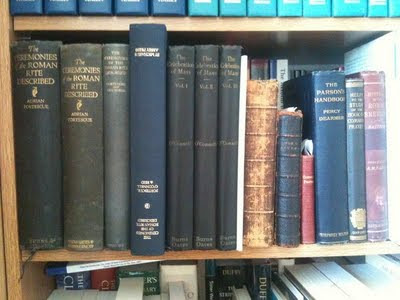 Some of the rarest books in Christendom on my bookcase. The one to the far left is a first edition (1917) of Adrian Fortescue's The Ceremonies of the Roman Rite Described, with its delicious Foreword (like Tolkien I refuse to use words like ''preface'' where an English word will suffice). I was after this book for literally years until one day I stumbled upon it on Abebooks and jumped at it. It is likely to be the most precious book in my possession. I have several first editions of Tolkien, but they're mostly from the 1970s and 1980s; all posthumous publications. I would, of course, like a first edition The Hobbit (1937) and The Lord of the Rings (1954-55), but I'm afraid I'd have to win the lottery to afford those. Even a second edition of The Hobbit (1951) is expensive, and scarce to be found. First editions are interesting from a research perspective since Tolkien edited The Hobbit early in 1950 to bring some of the story into line with The Lord of the Rings, particularly the chapter Riddles in the Dark.

I was thinking the other day about the compilation of Missals and Breviaries from the older liturgical books in relation to the published Silmarillion (1977). Whether or not you think it is advantageous for a travelling priest to fulfil his obligation to recite the Divine Office by carrying about a plethora of liturgical books in a rucksack, or just a small compendium of them all for his convenience, is irrelevant. Before Missals and Breviaries the Sacred Liturgy required a number of books to be decorously ordered, sung and celebrated. Let's see, the bishop with his Sacramentarium (containing the Collects, the Canon Romanus, but also other things now contained in the Pontificale etc), the Legenda (''the things to be read'' - containing the Lessons for Mattins, commentaries on the Scriptures, the Lives of the Saints, the writings of the Fathers, etc), the Psalterium, the Troperium (which had the Sequences of the Mass, or tropi), the Antiphonarium, Hymnarium, the Deacon with his Evangelistarium, the Lectionarium, the Ordinale (equivalent, let's say, to the Ordo Recitandi - which in my view is a semi-liturgical book); in the 17th century was devised the Octavarium for the co-ordination of overlapping Octaves and afterfeasts (again, akin to the Ordo Recitandi), etc, etc. When, however, during the Middle Ages low celebrations of daily Mass began to multiply, deacons, cantors, choirs and other servers required for the full celebration of Liturgy could not be procured so easily. Where before it was necessary for the priest to have only those parts of the Liturgy pertaining to him in the Sacramentary, now he was required to fulfil those parts pertaining to other people (such as the deacon), and so gradually the Roman Missal was formed; the Breviary underwent a similar evolution. 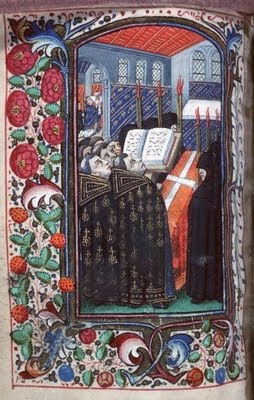 There used to be a principle in the West (still kept by the East) that the liturgical books had not the type of liturgy (Mass, Office, or celebration of the Sacraments) in mind in their ''publication'' but the person who used them. And so the Sacramentarium, which is ordinarily the book pertaining to the bishop (priests only celebrate Mass in place of the bishop; they are delegated by him to do so; not because of some special personal alter Christus charism, which can only be a residue of the ''low Mass mentality''), contained not only the prayers of the celebrant at Mass, but also Pontifical blessings, the rite of Baptism and Exorcism, Ordination - texts which these days are to be found in the Pontificale and the Rituale. The same applied to the other books. I expect that when the Deacon had a role beyond singing the Gospel at Mass in the West that he too had a book akin to the Sacramentarium. 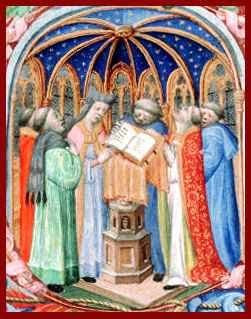 I have said this before, as did Fortescue a hundred years before me, but it is because of low Mass that we have Missals. The Roman church drew such a sharp distinction between low and high celebrations of Mass at the Council of Trent in the codification of precise rubrics for the ordering of such a celebration, where before local custom and the discretion of the celebrant and place prevailed. No such distinction between two forms of the same Sacrifice exists. Low Mass is to look as much like high Mass as possible. Before Trent a low Mass could be anything between what might be recognisably a ''Low Mass'' in its pre-1962 form and a sung Mass without deacon or subdeacon, but with one or two servers; one for the incense, the other for the chant. The principle was, as Fortescue says, to make the low Mass as much like unto a high Mass as could possibly be done within the means of the church. Since Trent (or more accurately since the 17th century) low Mass (or Low Mass as it now is) has been a minimalistic, said service, where Christ's Faithful are expected to watch a lonely priest as he garbles prayers which aforetime would have been chanted solemnly. 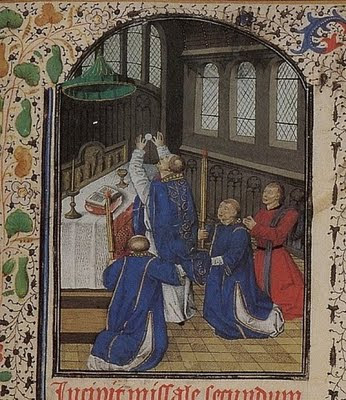 I'm not sure if it's the Roman zeal for logic (itself a rub-off from the Latin language, but that itself would be thesis material for which I am not cut out), looking for more accommodating or easy ways to get on with Divine Service, but the whole mentality seems anti-Traditional; almost slovenly. The compilation of Missals and Breviaries from the older liturgical books went hand-in-hand with the curtailment of the older liturgical principles. Anciently the bishop delegated his priests to celebrate Mass in his absence. Now the priest is the indispensable man who can procure the Sacraments with minimal effort by reciting formulae, saying magic words, and holding up a white disc. Anciently the Sacred Liturgy was celebrated most solemnly with real liturgical books which came from apostolic times. Look nowadays to a Mass Supplement in a Latin Mass Society magazine and you'll see ''Low Mass'' everywhere. But what do you get if you make everything compendious? What do you get if you render Liturgy so ''at the service of men'' rather than vice versa? The codification of Canon Law by the Roman church in 1917 springs to mind here, and the publication of The Silmarillion by Christopher Tolkien in 1977. The codification of Canon Law had at least intelligible motives - heretofore the interpretation of the Sacred Canons via the old authorities was a lengthy process, which could lead to irrelevance or injustice (and great expense). So a ''code'' of Canon Law is easier for everyone. But cost of ease comes at the expense of Tradition, the traditional understanding of law and custom. I can't speak for the liturgical history vis The Silmarillion but the editing process was lengthy and the end result was mediocre - canonical, being entirely consonant with The Lord of the Rings, but loosing a kind of mythological aura, which can only be found in scattered manuscripts carrying the auctoritas of age and the very fact of being different. Who cares if in one legend Fingolfin is spelt Fingolphin, or in another Morgoth goes first to the Ring of Doom and is then overtaken by Ungoliant on his way to Formenos and in another the account is different? These are primarily legends recorded by the Men of Númenor as told to them by the Eldar, and preserved in Gondor through many lives of men. Is it any wonder that there are different accounts?

The existence of The Silmarillion, the Roman Missal (in whatever edition) and the Code of Canon Law (even more so with the 1983 Code, which contains probably half of the 1917 Code) is testament to a fundamentally Western vice. ''I'm not doing my job properly and so I'm going to improve things by making it easier for me.''
Posted by Patrick Sheridan at 3:53 pm
Email ThisBlogThis!Share to TwitterShare to FacebookShare to Pinterest