The armour of light... 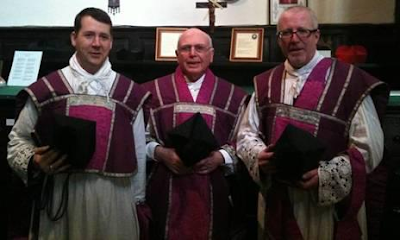 A welcome sight. The Sacred Ministers vested for the celebration of Mass at the church of St Magnus the Martyr nigh to London Bridge on the First Sunday in Advent. A truly splendid way to begin the liturgical year!

Almighty God, give us grace that we may cast away the works of darkness, and put upon us the armour of light, now in the time of this mortal life, in which thy Son Jesus Christ came to visit us in great humility; that in the last day, when he shall come again in his glorious Majesty to judge both the quick and the dead, we may rise to the life immortal, through him who liveth and reigneth with thee and the Holy Ghost, now and ever. Amen. (Collect for the First Sunday in Advent in the Book of Common Prayer). You will look in vain to the Sarum liturgical books for this. The Collect for the First Sunday in Advent in Sarum is much the same as the ''modern'' (you know what I mean) Roman books; it seems that the Collect above is a 16th century composition, not wholly inappropriate, it must be said; although the Collect prescribed for next Sunday is less good, and bethought of protestantism. The Officium in Sarum for this Sunday, and the next, and the next, correspond to the Roman Introits; for the First Sunday, even so:

The Introit Rorate Cæli, for the Fourth Sunday in Advent, is not found in the Sarum liturgical books, and in its place is the Officium:

A rather loose, albeit beautiful, translation is given by Coverdale. Remember me, O Lord, according to the favour that thou bearest unto thy people; O visit me with thy salvation, that I may see the felicity of thy chosen, and rejoice in the gladness of thy people, and give thanks with thine inheritance. We have sinned with our fathers: we have done amiss, and dealt wickedly. Remember me. Glory be to the Father, &c.

The Epistle and Gospel pericopes correspond across all three for the First Sunday, although in Sarum there is, of course, a Sequence (Salus Aeterna), which is peculiar (as are all the Advent Sunday sequences) since all lines of each verse end with the letter a, and do not seem to follow any strict poetic cursus. There is a goodly translation by Pearson (1871), which renders it almost Tolkienian, since it is laden with the sorrow of mortal men, but typical of Advent, with expectation, by which the season is enriched. I wonder if Tolkien knew of these Sequences? As a mediaevalist, it is not unlikely.

The Missal of Robert of Jumièges contains a proper Preface for this Sunday. I was hoping against hope that this would correspond to the ad libitum proper Preface for Advent in the 1962 Missal, but no. The preface in the 1962 Missal is, interestingly, derived from the Lyonese Missal, a curiosity considering that most else in that dread reform had no source in the Tradition of the Church.

Or as found in the 1962 books and the Lyonese Missal (to be used on all Dominicae and feriae even up to the Vigil of the Lord's Nativity inclusive):

It would be interesting to see how many traditionalists, accustomed to using pre-Pius XII liturgical books, use the ad libitum Preface for Advent - it's quite traditional. It is one of those rare things in the modern Roman Rite where you can have catholicity in variegation, rather than uniformity, which is not now nor ever desirable.

A blessed Advent to you all. Watch ye for ye know not when the master of the house cometh.
Posted by Patrick Sheridan at 6:17 pm
Email ThisBlogThis!Share to TwitterShare to FacebookShare to Pinterest