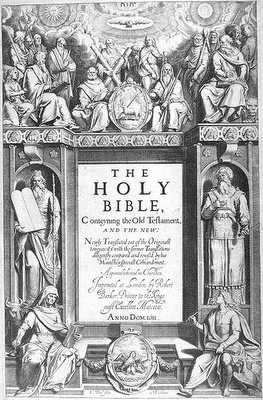 As you may know the year of Our Lord 2011 marks the 400th year since the publication of the Authorized Version, otherwise known as the King James Bible. Manuscript English bibles had been in circulation since the days of the Lollards, and the Authorized Version was the third official translation of the Word of God into English, the first having been Henry Tudor's Great Bible (with its famous frontispiece), the work of Myles Coverdale, one time rector of St Magnus the Martyr; and the Bishops Bible of 1568. The Gospel and Epistle pericopes for the Lord's Supper were revised in the Prayer Book of 1662 to bring them into line with the Authorized Version, but Coverdale's psalmody remained. I have heard it said that the Douay-Rheims version influenced the scholars who translated the King James Bible, but I have no source for that.

A service of commemoration was held this day at Westminster Abbey in the presence of Her Majesty The Queen and the Duke of Edinburgh to mark the anniversary. I am trying to think of familiar modern phrases which come from the Authorized Version, but I can only think of Tyndale's ''Let there be light.'' Suggestions in the combox please!
Posted by Patrick Sheridan at 12:50 pm
Email ThisBlogThis!Share to TwitterShare to FacebookShare to Pinterest