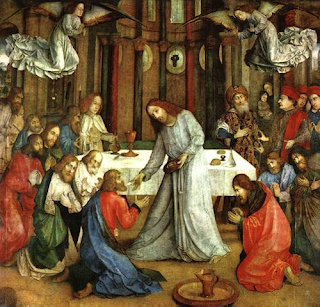 The age-old debate about Communion in the hand.

My point is that communion in the hand is not an evil of this world, as some would have us think, like to burning the bodies of the dead (approved by Rome since the days of pope Paul VI). St Caedmon's death was quite telling in this respect. He too took the Eucharist into his hands, and was not so much concerned with prostrating himself or swinging a thurible as the time of Mattins. Leaving aside questions of communion under both kinds, which naturally ties in with the manner of reception, I'd like to know wherefore the more recent praxis (a veritable usus recentior, one might say!) of receiving the Sacrament to yourselves is seen as necessarily superior to reception in the hand? Fear of irreverence or contamination is one thing but when you set yourselves up as better off presenting yourselves with an open mouth rather than open hands for theological reasons - reasons which, to my knowledge, didn't exist before the days of Thomas Aquinas - and condemn those who, in good faith, avail themselves of the more ancient manner of reception, then, your whole argument comes crashing down. For if reception on the tongue is the more fitting custom, for reasons of a more nuanced discernment of Christ's sacramental presence, then what shall we say of our catholic forebears who did not know this custom? Do you suppose that their belief in the Real Presence was less than yours, or somehow undeveloped or even indifferent? If the manner of reception is to be seen through the prism of modern praxis then you are, by implication, anathematising those who hold to a different legitimate custom, and your appeal to Tradition is therefore a red herring. Would you condemn someone for standing to receive, as is the tradition of the Orthodox who do not kneel on the Lord's Day just because it differs from the custom of the Latin Rite? Catholicity is not synonymous with uniformity. I think that so long as someone presents themselves in humility and good faith to receive, that they are properly disposed and in a state of grace, then it doesn't matter whether they stand or kneel, or receive on the tongue or in the hand. Both customs are good and have an age-long witness of the Church. It behoves us all to remember that, deference to the local custom notwithstanding, outward deportment does not always reflect inward piety, and vice versa. But then I would say also that making a shew of yourself in a church where one manner is preferred to the other by doing contrary for reasons other than fitness or health is also distasteful. In which case before you thought well enough of yourself to receive the Sacrament of the Lord's Supper then it would do you well to go back to your place and read St Matthew's Gospel, where Christ said: And when thou prayest, thou shalt not be as the hypocrites are: for they love to pray standing in the synagogues and in the corners of the streets, that they may be seen of men. Verily I say unto you, They have their reward. Even worse when you complain about it! To condemn a priest to his bishop (or even going above the authority of the bishop by an appeal to Rome!) who did not meet your needs, who did not understand your disposition, who refused to accommodate your demand, is little short of evil and schismatic on your part, and I would personally question your fittingness to receive in the first place - from a safe enough distance of having not personally received since Easter Sunday 2011, and that from the hands of a renegade priest.

Without going on and on about it, suffice it to say here that in my opinion there are worse things in life, and where, in all honesty, I have uttered my own judgement about a man's inward state of grace to receive, that judgement is really neither mine nor yours.
Posted by Patrick Sheridan at 1:22 pm
Email ThisBlogThis!Share to TwitterShare to FacebookShare to Pinterest