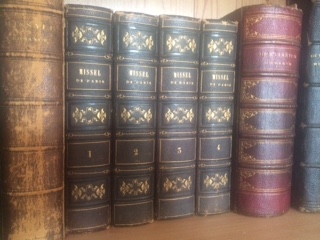 When I was sixteen years old my parents had a mind to move house. One morning we went to view an house in Bexleyheath, a large four bedroom semi-detached house with a sloping roof of the kind built in the 1930's. The owners of the house were unabashed elderly Calvinists. I had decided that they were Christians before they opened the porch door. There was a notice just above the letter box which read: "No mail on the LORD's Day, thank you." My mother detected that they were Protestants upon seeing a framed photograph of the old gentleman with the Lord Bannside. I never saw this. The old man brought me into his study because I told him that I liked books and he shewed me his modest albeit rather impressive library. He had very handsome volumes of Calvin and Baxter; he took one down and read a favourite passage therefrom. At this point I said "we're Roman Catholicks." I'll never forget the look he gave me.

It has been years since I undertook an inventory of my own books. The few that I have has taken me a life time to assemble (well, at least my life time). But they are too eclectic so far. They are enough to fill three large bookcases on subjects as different as Church history is from Vogue models. The only "complete" subject is Tolkien; even so, my Tolkien books are primary sources and exhibit few studies, although this has more to do with my contempt for most people who presume to study him. I have a small collection of liturgical books. It's a while since I studied them. If I want anything in life it is to assemble the rarest and choicest liturgical books for my very own study. The lore of liturgy is no longer comfortable; in fact it's almost as disturbing as the scientific study of psychopaths, but I enjoy it nonetheless. You may ask why. I would say that to look into an antient liturgical book is like stepping into the House of Elrond, a place where tradition, regal history and the truth is enshrined forever and kept in reverent memory. Close the book and go to your church and the opposite is the case. We may piously hope for a change of days but hopes have a tendency to bear fruit in want.
Posted by Patrick Sheridan at 2:06 pm
Email ThisBlogThis!Share to TwitterShare to FacebookShare to Pinterest