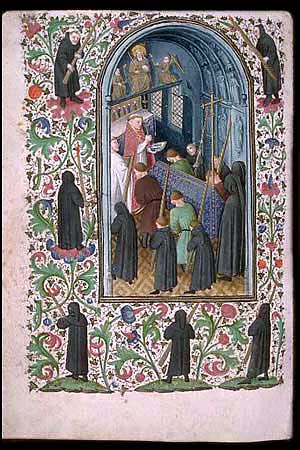 Among the more lamentable innovations in liturgical praxis brought about by the Papacy in the 20th century was Benedict XV's indult of 6th October 1919 (pp 420-421 in the Acta Apostolicae Sedis) which allowed the celebration of a Mass of Requiem, whether sung or not, on Sunday 2nd November (being the twenty-first after Pentecost) of that year. The decree states quite clearly that this departure from the liturgical norm was tantum hoc anno...attentis lacrimabilis belli conditionibus. These stipulations notwithstanding it is now customary to see in many Roman (and Anglican) churches the celebration of Masses of Requiem on Remembrance Sundays annually.

I do not wish to dishonour, in any way, the memory of the ultimate sacrifice that our grandsires made in defence of our country but can I just point out that it is grossly uncanonical to have any votive office on Sundays? Indeed, the peculiar nature of the Requiem Mass makes it entirely unsuitable for Sunday celebration. This is the Day which the LORD hath made, we will rejoice and be glad in it! The Eucharistic Liturgy must conform to the Office of the Day and the Sunday propers are older by far than the Office of the Dead. The pastoral motives of departing from liturgical law were at least intelligible in 1919 but the Great War has passed out of living memory. To what purpose do you continue holding these illicit Requiems to-day? Why not devote other Sundays to Culloden or Agincourt or Hastings and forget entirely all liturgical decency in a sentimentalist fudge? The Byzantines have a similar problem with the incorporation of the Litany of the Departed into the Sunday Liturgy.

One reason, among so many others, that I fell out with the Traddies.
Posted by Patrick Sheridan at 10:36 pm
Email ThisBlogThis!Share to TwitterShare to FacebookShare to Pinterest