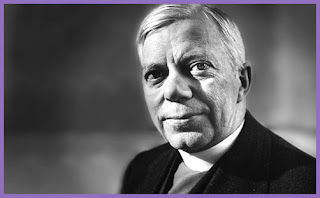 The Archbishop Cranmer blog offers a lucid, principled defence of Bishop Bell's Christian reputation here. I agree with everything said, particularly calling attention to the fact that, contrary to the statement made by the current Bishop of Chichester, history has not, in fact, been treated with honesty and transparency, but the opposite. None of us know the identity, or even the sex, of the accuser, or how much he or she has been paid in compensation - but we can reasonably expect it is several tens of thousands. I equally deplore the fact that Bishop Bell is now an unperson, doubleplus ridiculous and all that, with (so far) four buildings dedicated to him being renamed. It is only a matter of time before his feast day is expunged from the kalendar of the Church of England. I can only repeat what I said before. It is shameful.

Is it a 20th-21st century phenomenon? This hysteria about paedophilia; the tyranny of paedomania, as the eponymous Cranmer puts it. I've heard stories of paediatricians being brutalized because their assailants couldn't tell the difference between the noble profession and the ignoble proclivity. I'm sure you've read about Lewis Carroll's "Alice," and the controversy surrounding that gifted gentlemen's photograph. And then, of course, there's the stuff about Ted Heath, Leon Brittan, &c.We're (or rather, they're) constantly judging the past by the standards of the present. And when I say the "standards of the present," I don't mean by the yardstick of a more civilised, enlightened age; I mean by the narrow, dogmatic view of people who think that the death penalty is intrinsically wrong, that "homophobia" is tantamount to barbarism and that failure to conform to the cults of the poppy, Pudsey bear, and the magic number six million puts you out of the society of decent people.

I wonder which exalted figure from history "they're" going to come after next? It won't be somebody worth trashing, like Lady Diana Spencer or John Paul II, it will be another well-respected labourer in the Lord's vineyard, even such as Bishop Bell. Sometimes I feel like asking: why can't it be someone I hate for a change?
Posted by Patrick Sheridan at 2:44 pm
Email ThisBlogThis!Share to TwitterShare to FacebookShare to Pinterest