Don't Let's Be Beastly to the Germans... 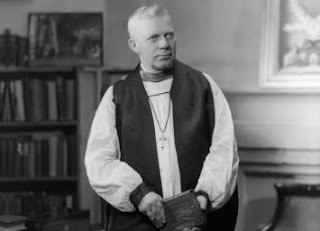 The late George Bell, Bishop of Chichester and would-have-been Archbishop of Canterbury (but for that arrogant dog Mr Churchill), is lately embroiled in a posthumous child abuse scandal. I'm afraid that in this, and in a few other cases (such as that involving a certain Fr John Tolkien), I am inclined to disbelieve the accusation as a grotesque calumny. So many people, many of them, no doubt, just opportunist anti-Christians wishing to cash in on the failing credibility of the churches, have come out of the woodwork in recent years with similar stories of alleged abuse. Where is the proof? Why would you wait almost sixty years? Or for that matter what of Bishop Bell's entitlement to presumption of innocence in the absence of proof?

A statement from the Dean and Chapter of Chichester Cathedral can be read here. It seems that the "Centre for Vocation, Education and Reconciliation" bearing Bishop Bell's name is to be renamed in the aftermath of the controversy.

A damning article in the Torygraph can be read here.

This is shameful. I have always admired people that go against the tide. I think this is because I am myself so against the rest of humanity. Bishop Bell spoke out against the indiscriminate bombing of German civilians when it was deeply unpopular to do so, and it cost him significant prestige in the House of Lords and, arguably, the See of Canterbury. He was also a pioneer of the Ecumenical Movement and befriended the Lutheran Confessing church in the 1930's. Perhaps, like the vilification of Pius XII because of his policy toward the Jews and his church's neutrality during the war, this allegation is part of a general movement to discredit Christianity? Who knows. In the meantime, I am in no hurry to suddenly stop keeping in reverent memory the legacy of a hero of Christian principle.
Posted by Patrick Sheridan at 10:33 am
Email ThisBlogThis!Share to TwitterShare to FacebookShare to Pinterest