Thoughts on Paris, and the hereafter... 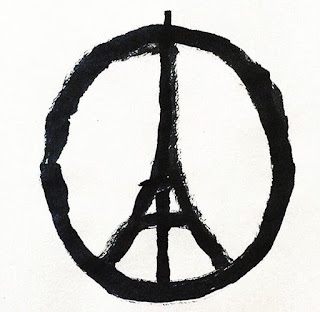 So far, media commentary on the well-planned, professionally executed, and completely successful mujahedin operations in Paris have been really rather quaint. Listened to closely, the ponderously sombre pundits will have you thinking that it's September 2001, rather than November 2015. The canned, fifteen year old comments and questions flow freely: "Horrific attacks kill 124 innocents;" "the attackers have nothing to do with Islam;" "how are the young men radicalized?;" "Muslims must condemn the attacks;" "we are not at war with Islam;" "why this senseless violence?;" and blah, blah, blah.

Mr Hollande's response has been predictably feeble. The terrible French reprisals we're all expecting will be "merciless." Well, we'll see about that. "An act of war?" Is he seriously that dim? Mr Cameron's response to the attacks was just laughable. He said: "The terrorists' aim is clear: it is to divide us and to destroy our way of life. So, more than ever, we should come together and stand united and carry on with the way of life that we love." THIS IS EXACTLY WRONG. A witness at the Bataclan concert hall said to police that he heard one of the gunmen tell a hostage: "It's Hollande's fault, (...) he should not have intervened in Syria." One is therefore compelled to ask: if our enemies speak so plainly about what motivates them, why do we not listen?

Media coverage will end in a few days and nothing much will change; at least for the Islamists. Western leaders will continue to blabber on about the rule of law; how Islam is a misunderstood, Quaker-like religion of peace and tolerance; that Jihad is a concept analogous to societal reform, &c. but they will scurry to avoid doing anything that will destroy the enemy in numbers that have any strategic impact whatsoever. "Jihadi John" was just one of many millions out there! The political class will hold impromptu summits of senior officials to condemn terrorism and we will probably see another absurd "Je suis Charlie" parade; with yet more empty promises of "unity" and "further action." And they will publicly beg the Arab tyrants and unnamed "Muslim leaders" in the West to do the dirty work they are too embarrassed or cowardly to let their own military and intelligence services do. And, of course, the public purse will be robbed by the charlatans who masquerade as social science professors. They will descend on Western universities and newsrooms armed with quack answers about how to solve "radicalization," and legislators will give them lots of tax payers' money just so they appear to be doing something. The sum of all of this will be what it has been for fifteen years: motion without movement.

Meanwhile the substantive post-Paris changes from Western leaders will come when they inevitably escalate the war they are already waging against us the people and our civil liberties, rather than by ordering the hugely expensive Western militaries to annihilate the Islamists, their civilian supporters and funders, and whatever infrastructure they possess. Because we in the West have become so cowardly about taking human life, even when it is deserved (except, of course, that of the unborn), we are bound not to kill the necessary number of Muslims, at home and abroad, to mitigate the Islamist threat. As a result, arrogant dogmatics like Mr Obama, Mr Cameron, Mr Hollande, and Mrs Merkel, and their colleagues will increase surveillance of law-abiding citizens like you and me, our communications, and our bank accounts; they will make international air travel more intrusive and inconvenient; and work overtime to silence and/or penalize those people who speak the simple, irrefutable fact that an increasing part of Islam is at war with the West, and that, contrary to the lies of Mr Cameron, that war is motivated not by Western lifestyles, but by what Western governments do in the Muslim world - be it invading Muslim countries, fawning over Israel, or championing those who blaspheme the Prophet Muhammad like that fishwrap Charlie Hebdo. May I say again what I said back in January: Je ne suis pas Charlie! All of these things, for Muslims, are Qu'ranic predicates to wage Jihad. If that is not a religious motivation, I don't know what is! But our refusal to recognize this as a religious conflict is interesting. It's almost as though, as secularists, our political class cannot even countenance the concept of religion in modern warfare. And such arrogance spills over into our foreign policy in the Middle East: surely secularism, the separation of church and state, democracy and women's rights are good for everyone. Muslims just haven't figured that out yet!

In many ways, the Islamists are the Western leaders' best friends in that they give them credible reasons to progressively eliminate civil liberties and continue building the authoritarian police states many of them seem to desire. Theresa May, in particular, is likely to take advantage of the Paris attacks to support her new bill which gives her the power to read our private correspondence and point cameras at whomsoever she likes.

Who's winning to-day? It's certainly not us. There is a good analysis of the attacks on Perceptio.
Posted by Patrick Sheridan at 6:19 pm
Email ThisBlogThis!Share to TwitterShare to FacebookShare to Pinterest