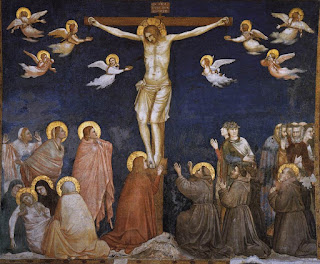 Do you know, as so often happens when I am under attack my first instinct is to feel angry at those in charge who are supposed to protect me. When I was a child that manifested as invective against my parents who didn't protect me from being punched in the face by my brother; then as I grew up it turned into rage against popes for letting the state of the church get so bad. To-day it is bitter laughter at the incompetence and indecision of men like Mr Hollande whose response to the attacks in Paris has been feeble and predictable. We can all shew grave faces and say words like "unprecedented," and "horrific." The fact that a state of emergency has been declared means that yet more French (and by extension British) liberties will be curtailed; air travel will become more intrusive and inconvenient, and the government can now point a camera at whomever it wants and read our private e-mails. Does this help us? Or protect us from "terror?" Of course not. I'd say that nothing can.

But maybe we can do something about it. Maybe by ceasing to be obtuse, arrogant dogmatics we (and by "we" I mean "they") can own up and say: "multiculturalism and open borders were huge mistakes," and "by letting in huge numbers of angry Muslims we've brought this on ourselves," and "our support for tyranny and rogue states and intervention in the Middle East has motivated our enemies, whom we have armed and to whom we have given the keys to the city." But that just won't happen. Democracy, the rule of law, and the other by-words of secularism must be right; and "Islamism" has nothing to do with Islam! It is iniquitous, tyrannous arrogance; or is it just gross ignorance and incompetence? I mean in Britain our political class are, for the most part, Oxbridge- educated.

Having said that, I condole with the families of those killed mercilessly in the attacks. Whatever the faults of our collective political class, and the dogmas that control them, it is always the innocent who suffer because of them.
Posted by Patrick Sheridan at 10:31 am
Email ThisBlogThis!Share to TwitterShare to FacebookShare to Pinterest