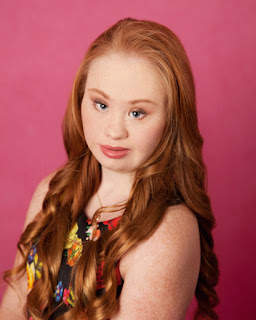 Thanks to Anti-Gnostic I came across the story of Madeline Stuart, a model with Down's Syndrome. There is an article about her on the Daily Mail here.

My father sometimes says: "we used to call them [blank]," whether that's "pansies" for homosexuals, "spastics" for the disabled (or crippled), or "mongs," or "mongoloid types" for people with Down's Syndrome. Of course, my father is 58 and comes from a time when Mass was Mass, the law was to be obeyed and miscreant children were actually disciplined in schools. These days we live under the aegis of lies. Simply being polite has turned into a pathological fear not to offend and past "victimhood" has become the stimulant for present, arbitrary prioritisation. Where before some occupations operated bastardy employment policies, nowadays prospective applicants for jobs are collated into whichever minority the doctrine of "inclusion and diversity" can think of, without much regard for competence or qualification. Of course, the irony in this case is that it was easier to get a job years ago. My father said that he left school on the Friday and walked into his job on Monday, where to-day prospective applicants (such as myself) have to vault several difficult obstacles before they even reach the interview stage.

To come back to Madeline, when did it become acceptable, or rather fashionable, to be disabled? I know that's just as consistent as commenting upon the "instant" you enter middle age, but the culture of the "handicapable" is one of the many things about the modern world that I heartily detest. Some years ago, when I expressed my discomfort with the "paralympic" games, I received hate mail. One person said:


"And by the way, your liberal use of hyphens confirms my expectation you have a third rate mind you dumb fascist."

Another person told me, to his credit publicly, that I was not allowed to say those things or even to think those thoughts. Nevertheless, I utterly fail to see the problem. As Lisa Simpson noted, the Guinness Book of World Records used to document actual achievements but has since degraded to really disgusting uniqueness, e.g: world's smelliest tumour. In a similar way, the paralympic games (pioneered, incidentally, by a Jew), set up to encourage war veterans, has since encompassed people with learning disabilities and congenital abnormalities. And it's all done in the name of inclusion and diversity, which, as a stimulant of any course of action, I find disturbing.

In poor Madeline's case, I can't help but feel she is being abused. Whatever callous and cynical modelling agency hired her has clearly cashed in on the inclusion and diversity ratchet and is shewing the world an alternative, but equally superfluous and shallow, form of beauty. That is to say, all the physical attractiveness of a girl with Down's syndrome: short and stubby, thick arms and legs, squint eyes, a fat head, &c; all painted over with a mascara wand. The girl probably has the mental age of a six year old. I expect in her simple, girlish world she is making "friends," and enjoying the runway but the harsh reality is that her contemporaries probably make fun of her appearance and her naivety and her manager probably laughs all the way to the bank.

But there's more! According to the article on the Daily Mail, Madeline has a "long-time" boyfriend. The question to ask ourselves here is: what normal adolescent male forms a romantic attachment to a girl with mental and physical abnormalities? 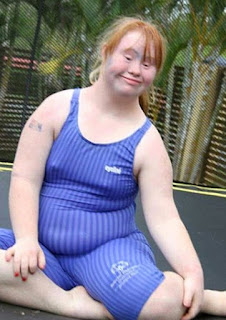 About three miles from here is an old hospital. I think it operates to-day as a retirement home but it used to be an hospital for "unwanted" children. Problem children and children with mental disorders were sent thither until 1960 when it closed down. I have no doubt that a few of the inmates were children with Down's Syndrome. I sometimes wonder whether it would be better to change our attitude to these issues to the way we used to think before "care in the community" became fashionable. Which is worse? To hide away society's problems in Calcutta's black hole or to deliberately deceive the innocent and the simple into thinking that they are objects of desire and to cash in on their exploitation?

Take your best shot.
Posted by Patrick Sheridan at 8:00 am
Email ThisBlogThis!Share to TwitterShare to FacebookShare to Pinterest