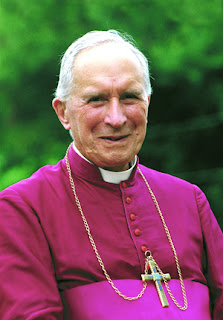 May my words and our thoughts be in the Name of God.

Religion has, unfortunately, ever been the forum for those already apt to evil; cynical opportunists, charlatans, and other money-grabbing sybarites. It's not hard to understand why. People concerned about death, the soul, or just leading a good life in some cultural way, which are quintessentially religious provinces, are easy prey for the crafty and manipulative. Joseph Smith and Brigham Young were two such evil men. So too is John Zuhlsdorf. But what about Archbishop Lefebvre? How did he fit into this grotesque catalogue of credulity and manipulation?

I had said that Archbishop Lefebvre was a charlatan. Maybe that is unfair and I am too hard on the man. Perhaps a more accurate picture would be that of a man, not very remarkable as ecclesiastics go, mediocre, a typical Pacelli appointee and perpetually compromised, in what conviction he had, by his diplomatic experience. That is not to say that he was without guile. His tyrannical and unloving way of dealing with, erm, let's call them "conscientious objectors" in the $$PX is well documented. He was unjust and indecisive, and clearly wallowed in the adulation of being, in his view and the view of the credulous, the sole saviour of the Church. His Ultramontanism, little more than a relic of his having been reared in a French monarchist household and certainly helpful in his rise through the hierarchy, was also, in my view, an inherent flaw. That he disdained Paul VI and held him to blame for many of the present ills of the Roman church is also well known, even if people choose to overlook the fact that his quasi-Sedevacantist views from the Society's inception until at least 1979 had more to do with this personal animosity than theological insight. It's more than obvious that Lefebvre swooned in John Paul II's presence, who, according to Rev. Anthony Cekada, gave him a "bear hug" at their first meeting and promised to treat the irregularity of the $$PX personally. One wonders what Lefebvre would have said to Wojtyla's frequent visits to synagogues and those scandalous Assisi gatherings. Would he have reverted to his old thoughts on neo-Modernist Rome or would he have just brushed the scandal aside, as a charlatan might? Who knows? As the Steward of Gondor said: "such ifs are vain."

It seems terribly fashionable in certain circles within Roman Catholicism to revere the late Archbishop, and to hold his contemporary followers in esteem; almost a litmus test of loyalty to the traditionalist cause. Why is this? Who sets this fashion? Where are the unseen party whips and why don't they make their purposes known? I find this invisible, insidious influence and unquestioning support for the Lefebvrists among traditionalists very frightening. Very tribal, very myopic, very superstitious. And this has less to do with the liturgical books of 1962 than my detractors care to think. It seems an almost pagan manifestation, a frenzied tendency in which people summarily abandon reason in exchange for a feeling, however fleeting, that they are involved in something profound, something universal that confers solidarity. Call that what you will; adherence to "tradition" (a point of view); resistance to "modernism" (an obsolete term); or, for the lesser minds, the ability to feel smug and important, which might obviate other social or sexual failures.

As such, the traditionalist movement seems such a mob to me. Why do men lose control of their faculties in crowds, riots, demonstrations and populist movements when they might otherwise be quite reasonable? I've been in conversation many times with traditionalists, who have told me in different ways: "Yes, Patrick, you're right. The 1962 missal is a load of old rubbish. Signum Magnum, Joe the Worker, Holy Week, all those things; they are an aberration of the Roman Rite." But they can't (or won't) admit the shallowness of their position. And this is, I think, largely because of the influence of Marcel Lefebvre, John Paul II and Benedict XVI on the traditionalist movement. Since 1984 traditionalists have assumed two external identification tags: one is the 1962 Missal, the other is the Society of [St] Pius X, so, if you like, one in space, the other in time. As a result, they are extremely sensitive to any suggestion that there might be criticism of either. This reinforces my belief that there is a demonic undertow to the traditionalist movement; a primitive, pre- or post-Christian ethos with little room for that sublime Pauline maxim: Prove all things; hold fast that which is good.
I have felt it myself. I was ever conscious of the pressure beating upon me from outside when I was involved in the traditionalist movement, and took part in events organised by The Latin Mass Society. This is chiefly why I gave it up; I was in fear for my mind, more than anything else! "One of us! One of us!"

To conclude these thoughts I would observe the most salient points. Traditionalism, be that schismatic or obedient, is what happens when a tradition has died. The liturgical books of 1962 are defective, and an aberration of the Roman Rite, and these are what have been enshrined in positive law and promoted by the $$PX. Marcel Lefebvre was a schismatic, dissident bishop who rejected an ecumenical council of the Roman church. He illegally consecrated four bishops, assisted by the openly Sedevacantist De Castro Mayer (despite the purge of the $$PX of nine priests, ostensibly on charges of Sedevacantism in 1983). If Lefebvre was praiseworthy, these things seem far more grave than aught else he might have said or done. And one last thing: his followers, particularly the four recently rehabilitated bishops, leave a lot to be desired. The lifting of the excommunications conspicuously did not apply to Lefebvre himself, and not one of them stood up for Lefebvre and objected to this. Their attitude seems to have been: "I'm all right, Jack. We're back in the club now." Not very good, not very episcopal. Why, then, are people so fascinated by these renegades?
Posted by Patrick Sheridan at 9:00 am
Email ThisBlogThis!Share to TwitterShare to FacebookShare to Pinterest