Who does this man think he is? 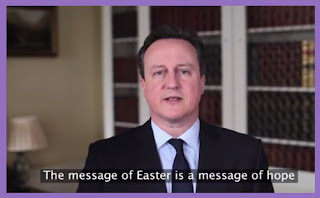 I am pleased that "Archbishop Cranmer" picked up on this as I had. The difference is, I didn't watch Mr Cameron's "Easter message." I have absolutely no interest in what he says about Christianity, which is mostly lukewarm, cynical, and politically-correct rubbish. Maybe I'm too old fashioned and live in a world of make-believe but I thought Her Majesty The Queen spoke to the people about such things? She is a sincere Christian for one, and it is not for naught that she is Supreme Governor of the Church by law Established, which might be a joke but is at least some relic of Christ at the heart of this nation. No, Mr Cameron can sod off with his silly rhetoric. I'd rather hear of God's lively oracles from His anointed than some elected, careerist politician.
Posted by Patrick Sheridan at 2:34 pm
Email ThisBlogThis!Share to TwitterShare to FacebookShare to Pinterest