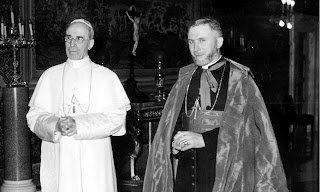 The number twenty-five certainly has a lot of symbolism this year. No, this is not going to be as insightful and inspiring as the Oxonian Clerk's latest article, qualities for which these days I have no aspiration, just a quick note on the contribution of one man; a Frankish clergyman called Marcel Lefebvre. He died twenty-five years ago to-day and is buried in a converted garage in Switzerland. It's also the anniversary of the 1983 letter of just grievance sent to him by nine priests of the priestly Society, among them the Reverends Anthony Cekada and Eugene Berry who both read this blog once upon a time (and, it's unlikely, but perhaps still do). I encourage you especially to read the Rev. Anthony Cekada's stuff over at www.traditionalmass.org. Apposite for to-day's reading would be the text of the Letter of the "Naughty Nine," and the account (in Pdf) of the four year legal battle between the Nine and Lefebvre over property rights and such things. Even a cursory reading of these documents will shatter the myth of the "saintly archbishop," valiant, unshaken and constant to the end. No! Lefebvre was rather a snake in the grass, a complete fake, and as Ultramontane as most of the French prelates at the First Council of the Vatican. His considerably more hard line position taken from the Society's founding till the early 1980's, a position that could be described as "sedevacantist," can be better explained by his personal animosity towards pope Paul VI (of blessed memory) than genuine conviction. Then along comes a young, charismatic John Paul II, waves his magic wand and just watch as the dissidence and principle melt in a pot of Ultramontane credulity and hyperbole. What a sham! And woe betide anyone who disagreed with him! As Rev. Cekada says:


"Abp. Lefebvre made a regular practice of threatening priests with expulsion or actually expelling them from the Society, and then making no provision whatsoever for their support. By 1983, this was part of the archbishop's standard operating procedure — cross him and you were out in the street with no appeal."

Contrary to the version of history made popular by Richard Williamson, aka: the reverend Party Line, this had nothing to do with Sedevacantism. Doubtless some clergy of the $$PX held sedevacantist opinions but this only became an issue in the early-1980's. Before the negotiations with (neo-Modernist) Rome, whose paragon was John Paul II, the $$PX was a very flexible, loose association of priests and lay people held together less by the charisma or will of Lefebvre himself as a common ideal, a common rejection of Modernism in the post-Vatican II Roman church. Liturgically, the $$PX had no real standard (there was no $$PX "charter," the society had no canonical standing). In France, for instance, you would walk into a chapel administered by the Lefebvrists and you would find a kind of hodgepodge of 1962 and post-1962. Contrast this with England and North America, where pre-1956 was the rule. Lefebvre himself seemingly had no preference, celebrating the reformed rites as they were in 1967. What was an issue, for the nine priests and their congregations and seminarians, was the increasing tendency of Lefebvre to change his mind on a whim on some disciplinary matter (and then turn mercilessly on anyone who disagreed with him); his lofty, narcissistic view of himself as if he were pope and magisterium; the validity of the sacraments administered by new priests, of doubtful orders, in the Society; and crucially the liturgical books of 1962. Charges of Sedevacantism were just a convenient means of silencing opposition. As to imposing 1962, Rev. Cekada further explains:


"Now not even the head of a real religious order like the Cistercians has the power to impose new liturgical practices on members — and Abp. Lefebvre was nothing more than a retired bishop heading a priests' association that had no canonical existence. He had no right to dictate liturgical practices to anyone. Apart from the legal issue, there was the principle itself. These liturgical reforms were the work of the Mason Bugnini. They were one stage in his program to destroy the Mass and replace it with the Novus Ordo assembly-supper. Knowing that, there was no way I and my fellow priests would use his Missal."

It is a tendency that has been evident throughout the history of the Roman church for a thousand years. A combination of political expediency, aggressive proselytism, modernising, and sniveling Ultramontanism. There were many people in history who knew what side their bread was buttered. Charlemagne was one, Alfonso VI of Castile was another. Marcel Lefebvre was just the latest, at least liturgically. The more "mainstream" a rite, the more a rite is aggressively promoted by Rome, together with the relative native conviction or goodness of the subject, the standard slips as people forget and are, in turn, forgotten. Put simply, as Ultramontanism rises, liturgy plummets. As dissidence wanes, so too does the standard. And this is what we see to-day. Twenty-five years on, what is Lefebvre's legacy? Is it a new liturgical movement, grounded in a burning zeal for truth, constancy and tradition? Is it the reconciliation of an internal schism? No, it's insincere morons like the one I met on the way to St Bede's Clapham Park once holding his 1962 missal and thinking himself so very pious and important. It's those ridiculous pseudo-canons of the Institute of Christ the King Sovereign Priest, draped in blue. It's the scandalous strategy of carrot and stick, with every few years abortive hopes of a reconciliation with Rome. And probably most damaging of all is the infiltration and usurpation of the Traditionalist movement by neo-conservatives (that is, the superstitious types willing to accept the latest Roman defecation but simply "prefer" the "usus antiquior"). This was a process begun in 1984, with Lefebvre's negotations with Rome, and the decree Quattuor Abhinc Annos. Tradition, as a cause, was then cheaply discarded and the Ultramontane orthodoxy of the conservatives took over. These days concern about the bastardized rite of 1962 is dismissed as "liturgical fetishism." Or as Lefebvre himself might have said: "la foi, c'est moi!"

I'm afraid I don't have a good word to say about Lefebvre, a pernicious, lying, devious old queen, now in Hell. If he was buried in England I think I'd piss on his grave.
Posted by Patrick Sheridan at 9:00 am
Email ThisBlogThis!Share to TwitterShare to FacebookShare to Pinterest