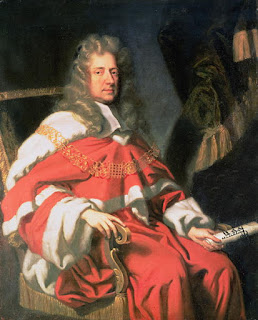 This quote was too long to put into my previous post but I shall post it here. It is from George Orwell's The Lion and The Unicorn, which I encourage you all to read.

"And yet the gentleness of English civilization is mixed up with barbarities and anachronisms. Our criminal law is as out-of-date as the muskets in the Tower. Over against the Nazi Storm Trooper you have got to set that typically English figure, the hanging judge, some gouty old bully with his mind rooted in the nineteenth century, handing out savage sentences. In England people are still hanged by the neck and flogged with the cat o' nine tails. Both of these punishments are obscene as well as cruel, but there has never been any genuinely popular outcry against them. People accept them (and Dartmoor, and Borstal) almost as they accept the weather. They are part of 'the law,' which is assumed to be unalterable.

"Here one comes upon an all-important English trait: the respect for constitutionalism and legality, the belief in 'the law' as something above the State and above the individual, something which is cruel and stupid, of course, but at any rate incorruptible.

"It is not that anyone imagines the law to be just. Everyone knows that there is one law for the rich and another for the poor. But no one accepts the implications of this, everyone takes it for granted that the law, such as it is, will be respected, and feels a sense of outrage when it is not. Remarks like 'They can't run me in; I haven't done anything wrong,' or 'They can't do that; it's against the law,' are part of the atmosphere of England. The professed enemies of society have this feeling as strongly as anyone else. One sees it in prison-books like Wilfred Macartney's Walls Have Mouths or Jim Phelan's Jail Journey, in the solemn idiocies that take place at the trials of conscientious objectors, in the letters to the papers from eminent Marxist professors, pointing out that this or that is a 'miscarriage of British justice.' Everyone believes in his heart that the law can be, ought to be, and, on the whole, will be impartially administered. The totalitarian idea that there is no such thing as law, there is only power, has never taken root. Even the ingelligentsia have only accepted it in theory.

"An illusion can become a half-truth, a mask can alter the expression of a face. The familiar arguments to the effect that democracy is 'just the same as' or 'just as bad as' totalitarianism never take account of this fact. All such arguments boil down to saying that half a loaf is the same as no bread. In England such concepts as justice, liberty and objective truth are still believed in. They may be illusions, but they are very powerful illusions. The belief in them influences conduct, national life is different because of them. In proof of which, look about you. Where are the rubber truncheons, where is the castor oil? The sword is still in the scabbard, and while it stays there corruption cannot go beyond a certain point. The English electoral system, for instance, is an all but open fraud. In a dozen obvious ways it is gerrymandered in the interest of the moneyed class. But until some deep change has occurred in the public mind, it cannot become completely corrupt. You do not arrive at the polling booth to find men with revolvers telling you which way to vote, nor are the votes miscounted, nor is there any direct bribery. Even hypocrisy is a powerful safeguard. The hanging judge, that evil old man in scarlet robe and horsehair wig, whom nothing short of dynamite will ever teach what century he is living in, but who will at any rate interpret the law according to the books and will in no circumstances take a money bribe, is one of the symbolic figures of England. He is a symbol of the strange mixture of reality and illusion, democracy and privilege, humbug and decency, the subtle network of compromises, by which the nation keeps itself in its familiar shape."

I have quoted this, with an honest tear in my eye, from my Penguin copy of George Orwell: Essays, pp.144-145.
Posted by Patrick Sheridan at 9:00 am
Email ThisBlogThis!Share to TwitterShare to FacebookShare to Pinterest