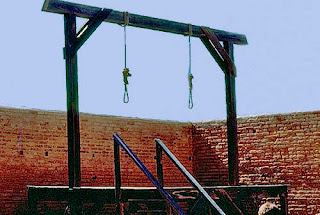 "Hanging is too good for him, said Mr. Cruelty." John Bunyan, The Pilgrim's Progress.

This news is stale now but I am hardly surprised at pope Francis' position on Capital Punishment. "The commandment ‘You shall not kill’ has absolute value and applies to both the innocent and the guilty," he says. Actually, the commandment says: "thou shalt do no murder," and reiterated by Christ himself in Matthew 19:18, which has a totally different meaning, and I'd like to know at what point this general, prescriptive, Bible-in-basic-English translation supplanted the old rendering, but the significance of this change is here for all the world to see. I myself was not aware of the old rendering until I first read the Book of Common Prayer, as late as my university years. We've all heard the trite objections to capital punishment. Examples of unjust and botched executions are the most common. Now, tenderness, and even a sense of outrage, about these things are feelings that I share myself, especially where justice, competence and due process have been wanting. But are these absolute arguments against capital punishment? As a matter of principle, I am very much in favour of capital punishment and I tend to think that people who are repulsed by the idea perhaps don't believe as much as I do in the immortality of the soul, or are perhaps too naïve to realise the unrepentant intractability of hard criminals. It's like watching nature programmes with my mother. She always cheers on the fleeing antelope and becomes visibly distressed when it is tackled. And I can't understand this! Should the cheetah go hungry? Would my mother force feed carnivores tofu, as Linda McCartney did her malnourished dogs, to spare the creature further down the food chain?

But I digress. There are many reasons I favour capital punishment. For a start, it is clearly sanctioned by the Holy Bible:

It is also just. Look at this man: 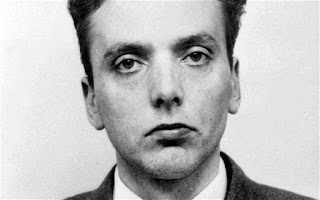 I cannot get over his eyes. Ted Bundy had the same shallow, yet menacing, expression. If eyes are the windows of the soul then these are windows into nothing.

His name is Ian Brady. In the mid-1960's he and his accomplice Myra Hindley lured five small children onto Saddleworth Moor where they were sexually assaulted and murdered. Now, Hindley may have fooled that old charlatan Lord Longford with her sob story about conversion to Christianity before she died but Brady has demonstrated no remorse for his crime and is still very much alive. Declared "criminally insane," and garlanded with so many "rights," he lives in Ashworth Prison where he has access to television, three square meals, and a bath every night - all at taxpayers' expense. His victims, however, remain rotting out on the moors. Is this the exemplar of justice? The maintenance of this man's pathetic life? The Moors Murderers were apprehended shortly after the abolition of capital punishment under the revolutionary Labour government of the mid-1960's*. When confronted with calls for the return of the gallows, the Home Secretary Roy Jenkins, a man who did more to ruin this country than either Mrs Thatcher or Mr Blair, airily dismissed them with such arrogance as can scarcely be believed. "I will not change my policy in the shadow of recent events, however horrible," he said. One could well ask, what would change his mind? No prizes for guessing, nothing would.

People say that in such cases as the Moors Murders calls for capital punishment are emotive and vengeful. And well they might be, particularly from the victims' families. But surely one of the purposes of a stern penalty (where it exists) is the prevention of personal revenge? As a civilization, one of the bargains (if you like) we make with our rulers is the relinquishment of the right to seek personal vengeance, and consequently the endless blood feuds that come of that. In return, we ask for our rulers to wield the civil sword and to make "him that doeth evil," as the scripture says, fear the law and to impress upon society the moral lesson that no evil deed will go unpunished. So contrarily, capital punishment is not itself vengeful, it is impartial. And it is not without mercy either. The fact that the hangman said* to the felon before the drop: "God have mercy on your soul," is an indication that the State refers the matter to a higher court in the hope that he, however personally vile or grievous his crime, might be saved, if he truly repented. The alternative, under our enlightened, "civilized," society is for a murderer to go to a prison in which he is likely to be attacked, or even killed, by his fellow inmates (or commit suicide, as happened with Harold Shipman), in the false hope that a brutal prison can help "rehabilitate" him, which seems to be a false hope shared by pope Francis with his silly rhetoric. By eviscerating justice in this way, by going "soft," we have guaranteed personal vengeance and the old blood-feud from savage ages; petty justice carried out by the low against the lower. So much for civilization!

*Actually, the death penalty was severely restricted following the 1957 Homicide Act so there was little possibility of a death sentence for Brady and Hindley anyway.

*UPDATE: See the comments. Fr Anthony Chadwick was kind enough to correct this mistake, written hastily in an afternoon. It was, of course, the judge, and not the hangman, who told the man convicted: "God have mercy on your soul."
Posted by Patrick Sheridan at 3:50 pm
Email ThisBlogThis!Share to TwitterShare to FacebookShare to Pinterest