Fr Andrew has put up an interesting Q&A over on his blog about the revival of local Western saints in the Orthodox Church. I agree with most of it, particularly his observations (which I have made myself, to my accustomed derision) about the dedication of churches to modern "saints," or even funny concepts such as the "sacred heart." This is evident in Ireland, especially, where dedications to saints like Kevin, Brigid or Colmcille are very rare, and even where there are such churches there is no actual cultus. A small exception tends to be made for St Patrick but his memory is defiled by the tawdry, drunken festival which makes of Ireland a universal embarrassment. As a child I was back and forth to Ireland all the time, mostly to the North where I have family. The first time I visited the South was when I went to an Irish dancing competition in Co. Clare with my mother, circa 1998. I went to the local cathedral for a Mass, which was not very memorable, but what was memorable was going into the cathedral shop afterwards. There I discovered a little green book, on the front of which was a stained glass window depicting my patron, St Patrick, called "Irish Saints." Up to that point the only image I had ever seen of St Patrick was this one (below), which presumably dates to the 19th or early 20th century (does anyone know?). 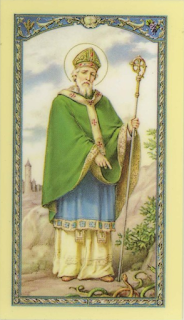 Even at the age of 10 years I found his green chasuble and benevolent expression rather saccharine and not at all like the author of the beautiful Breastplate. And I knew nothing at all about any other Irish saint. Not till I opened the little green book (which I still have), and read the words: "Ireland, as all her schoolchildren used to learn, was known in the golden age of monasticism as Isola sanctorum doctorumque - the isle of saints and scholars." I begged my mother to buy me this little book, which she kindly did. It was £4.99 (in those days Ireland was still not fully independent of England!). It was from this time that I started to discover the wealth of local saints, and not just Irish ones. My paternal grandparents moved to Cornwall at about this time, and lived in a village called St Teath on Bodmin Moor, named for the 5th century St Tetha the Virgin. There are lots of places in Cornwall named for old, forgotten saints; St Ives, St Austell, St Mawes, and many others that I don't remember. It reminds me of the Christian symbolism of The Lord of the Rings, not sledgehammer subtle like the Narnia stories, but absorbed into the fabric. Just like the memory and former cultus of a local saint is absorbed into the village. Even Barry, the publican of the White Hart Inn in St Teath, could tell me a thing or two about the patron of the village, and went to services in the village church.

This is exactly what I mean by the title of of this post. Orthodoxy in England (and later Ireland) was severed at the Battle of Hastings when the soldiery of the Bastard Duke marched under a papal banner and, after a series of church "reforms," the new prelates cast opprobrium on the old church, her saints and customs and replaced them with the new. But, like cut flowers, the semblance of true religion remained where people were in good faith and confessed the Holy Name of Jesus. Religion may have died, but it was still fragrant. There was still dignity in worship down to the Reformation, there was still faith, there were still lively saints, albeit blended with superstition and excess. The extent to which the people of England and Ireland were Papists was just an accident of history, and place of birth. Remember what Frodo said when he returned to the Shire about the hobbits and the ruffians: "But remember: there is to be no slaying of hobbits, not even if they have gone over to the other side. Really gone over, I mean; not just obeying ruffians' orders because they are frightened." It is precisely because these islands were fortified by the Orthodox faith that Christianity cannot ever, fully die out, and and ever and anon somebody like me, or Fr Andrew, is born and takes an interest in the faith of the fathers. Some of the Anglican divines were undoubtedly crypto-Orthodox. Matthew Parker and Richard Hooker spring to mind. On the Papist side one could well argue (as my own Church history tutor at Heythrop did) that John Henry Newman was also a crypto-Orthodox, somebody born out of time and place and yet hungered and thirsted after righteousness, as the scripture says. These islands were either accursed of God because of the sins of certain high ecclesiastics in faraway Rome, in which case nothing worthwhile can be said of aught between 1066 and the arrival of Greek and Russian immigrants, many of whom, like the Normans, disdained our old saints. Or, and this is my belief, God sent down the Holy Ghost in sundry churches to keep some faith alive, despite the schism and the general waning of knowledge in the westering sun of Orthodoxy. Who can see to the depths of Her Majesty's heart? Pious and reared in princely lore, is she cut off from the Church? No, her patron is St Edward the Confessor, whose relics are enshrined in the heart and foundation of this realm. Westminster Abbey may be England's Valhalla yet it is still a church. So I am wont to disagree with Fr Andrew on this point and tend to think that there was more to St Edward the Confessor than feudalism and his Norman mother. 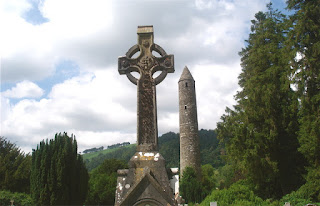 Possibly the holiest place I have ever visited, this is one of the Celtic crosses in Glendalough, a serene and beautiful place in the Wicklow Mountains. St Kevin's Tower is in the background.

Cut flowers are dead, and soon wither. I wonder what stage we're in now? If only the Orthodox churches of England put away ethnic isolationism and political prejudice they might attract more converts. I have no interest in Slavic culture! But like the crypto-Orthodox of the deep English past I yearn for the sacraments and the communion of the Church. Am I, a sinner with the little green book, to be thrown out to compost with the rest of my countrymen?
Posted by Patrick Sheridan at 11:41 am
Email ThisBlogThis!Share to TwitterShare to FacebookShare to Pinterest