It was with great reluctance that I watched (part of) this video on the history of the $$PX in England. I was reluctant because whenever I look at images of liturgical celebrations under traditionalist auspices from years ago, or old liturgical books, I am assailed by contrary feelings of regret and loathing. The reason being that they shew up, not in black and white as the decrees of the Roman dicasteries do and which anyone with a little Latin can read, but in technicolour the utter stupidity, tribalism, and the fundamental treachery to religious integrity which pervades over the modern traditionalist movement and its adherents - well-represented by people like Gabriel Sanchez.

Look at these screenshots, from Holy Week 1983, and tell me that the Society of [St] Pius X celebrated Holy Week 1962 fashion at Sts Joseph and Padarn before Lefebvre sold out to the Papacy in 1984. 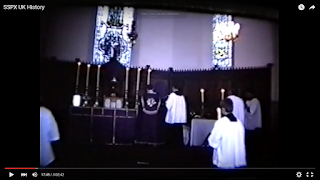 The celebrant clearly blessing palms at the Epistle corner in a violet cope, contrary to the rubrics of the 1962 missal which state that he should do so facing the congregation, at a table separate from the altar, in a red cope. 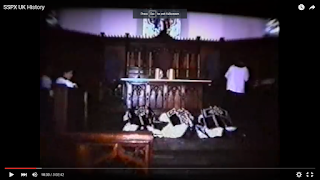 There are other images in the video, people I recognise who took part in these rites and whom I wouldn't want to meet again, knowing their hearts and minds. I called this post stupidity and tribalism because this is the essence of the traditionalist movement post-Quattuor Abhinc Annos. The pope waved his magic wand and the traditionalists lost their way when they did obeisance to him. It was a case of: "put aside your dissidence and become respectable, and you can only really do that by being more like me, your rightful lord and master." So they cheaply discarded the tradition they upheld to that point and consigned their cause to the dustbin of history, in almost perfect imitation of what Rome herself did consecutively throughout the 20th century, in 1911, 1920, 1942, 1956, pick any year. The consecrations that took place four years later are of almost no importance. Lefebvre himself was a charlatan with no integrity, which is not a malicious assertion but based on what I have been told by people who knew him, and can be seen from his treatment of those who opposed his aliturgical will in 1983.

And modern, mainstream traditionalists just love the Lefebvrists and revere the man himself. Why? Is it a contest on who can be the most sycophantic or faithless? I have been accused of ignorance by them for pointing things like the above screenshots out, not to mention articles I have written such as this one, in which I have, with watertight research, demolished the reason for their existence. They themselves will not discuss these things. And in my experience, if you do bring these things up among them, you're erased, declared an unperson. These people prefer not to remember the days when they had substance. God only knows why. Perhaps they prefer tat and superstition to tradition and faith, but I'd like to know how any of them sleep at night.
Posted by Patrick Sheridan at 6:44 pm
Email ThisBlogThis!Share to TwitterShare to FacebookShare to Pinterest