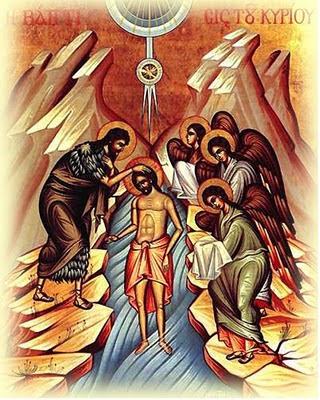 The voice of the Lord is upon the waters, Alleluia, the God of glory thundereth, Alleluia.
A few months ago, at a friend's kind suggestion, I purchased a copy of The Blessing of the Waters on the Eve of the Epiphany (1901), arranged and translated from the original Latin, Greek, Syriac, Coptic and Russian by John, Marquess of Bute, and E.A Wallis Budge. It is a fascinating text, and the original, ''Old Rite'' (we might say), Latin ceremonies bear a striking similarity to the ceremonies of the other Rites.
Unfortunately most of the rubrics for the Latin version are obscure, scarce and in Italian (which I find rather strange), so I cannot give a detailed outline of the ceremony. On the Eve of the Epiphany (one of the four Greats of the liturgical year - I believe that only Easter, Pentecost, Epiphany and Christmas should have the rank of ''double of the first class'' - but this is besides the point), after the chanting of the ninth lesson at Mattins, the priest, vested in cope and with sacred vestments, with the Deacon and Subdeacon, likewise fully vested, preceded by Acolytes bearing the candles and processional Cross and the Thurifer, and choir, come to the appointed place. As they process a Responsory (Hodie caeli aperti sunt) is chanted. The rest of this ''old rite'' Latin version, which goes on for another 41 pages in my copy, is taken up with various Antiphons, Responsories, Blessings, Exorcisms, Scripture lessons and Psalms. As I have said, the rubrics are not entirely clear, although the text is very interesting for translation.
A footnote on the first page reads:
''When the writer saw the ceremony performed in the church of Sant' Andrea in Valle, at Rome, the water was in a large silver vessel somewhat like a wine-cooler, placed upon a table in the middle of the Nave. In Egypt there are tanks for the purpose adjoining the churches in the cities; but he understands that in Christian districts the Nile itself is blessed, and it seems to be more usual to bless a natural river where it can conveniently be done. At St Petersburg this is the Neva, in the frozen surface of which a hole is cut in order to get at the water, near which is a chapel beautifully decorated, in honour of the Baptist, built of blocks of ice. In Abyssinia, if the stream nearest to the church is not sufficiently large, it is dammed at a convenient spot so as to make a pool.''
Interestingly there are two forms in the Latin Rite; the ''Old Rite'' one which I have already mentioned, and a ''New Form,'' approved by the S.R.C in 1898. Bute says:
''This form is chiefly interesting as marking an entire variance from the ancient form used in the Church of Rome, and also in all other churches. Those forms are all in commemoration of the baptism of Christ, while in this that subject is entirely ignored and the form made simply one for blessing holy water to be used against evil spirits.''
The Old Rite version is 41 pages long, and features lengthy chants and long prayers of exorcism. The ''new form'' is 3 pages long and seems to be little different from the blessing of ordinary holy water before High Mass on Sunday. The tale, as long as years of torment, of liturgical deform in the Roman Rite goes on...
Posted by Patrick Sheridan at 2:50 pm
Email ThisBlogThis!Share to TwitterShare to FacebookShare to Pinterest