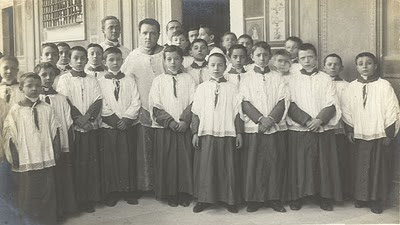 I have a morbid interest in the phenomenon of the castrati - men who were forcibly mutilated at a young age so that their vocal ranges retained their child-like uniqueness. I imagine that this was a rather callous gamble with the child's life - I mean there never was a guarantee that the boy's singing voice would remain absolutely wonderful was there? Years ago I listened to the only record made of a castrato singing (Alessandro Moreschi, the last castrato of the Sistine Chapel, who died (scarily) in 1922 - in the lifetime of my grandfather!) part of Eugenio Terziani's Hostias et Preces (you can find it on wikipedia), and to be quite honest I fail to see why they were so popular. The man's voice sounds to my ears like a cat screeching, and I felt quite horrified listening to it. I once heard that Allegri composed his Miserere with the castrati in mind; can anyone verify this? I doubt I'd have enjoyed it so much had I heard it sung for the first time by a choir consisting solely of men...
I fail to see how the Church (and not only the Catholic Church) got around the very serious moral questions surrounding the castrati. There is no warrant for the horrid practice in the Scriptures - just a very liberal interpretation of Matthew 19:12 and St Paul's command about the silence of women in church in 1Corinthians 14:34. Pope Benedict XIV tried to suppress the castrati in the 18th century, but so popular were they that he failed, although they declined eventually, until the Church stopped admitting castrati to the Sistine chapel choir in 1878.
I don't know this, of course, but what would the life of a castratus be like? I imagine that it must have been quite depressing, especially if the man had wanted to sire children. What do we think of castrati these days? I think personally that they were a huge mistake, and the practice laid the lives of many boys in ruin.
The above photo is of Mgr Lorenzo Perosi, Maestro Perpetuo della Cappella Sistina between 1898 and 1956 (gosh didn't he see many changes!) and the Sistine Chapel choir. Perosi saw the final departure of the castrati from the Vatican in 1913, when Alessandro Moreschi retired.
Posted by Patrick Sheridan at 3:29 pm
Email ThisBlogThis!Share to TwitterShare to FacebookShare to Pinterest