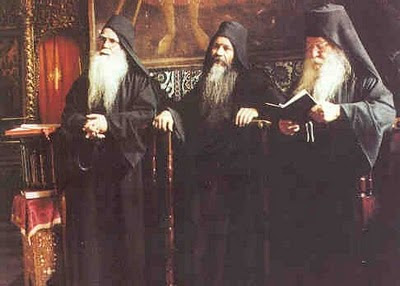 Greek monks chanting the Office. Does anyone know the technical name of the wooden frame they're all leaning against? They're like choir stalls...
Leaving Egeria aside for one moment I'd like to consider something else liturgical. If you read the Ordinary prayers of the Roman Rite, many of which are among the most ancient features of the Rite, you'll oft come across the word ''circumstantes.'' This word refers literally to ''those standing nearby'', and comes from the verb ''circumsto'' which means ''I stand around'', or even ''surround''. For example, in the Diptychs of the Living in the Roman Canon the priest says:
Memento, Domine, famulorum famularumque tuarum N. et N. et omnium circumstantium...[Be mindful, O Lord, of your servants and handmaids N. and N., and of all standing nearby...]
Likewise, in the offering of the Lamb (the Suscipe sancte Pater prayer) in the Offertory:
Suscipe, sancte Pater omnipotens aeterne Deus hanc immaculatam hostiam quam ego indignus famulus tuus offero tibi, Deo meo vivo et vero, pro innumerabilibus peccatis et offensionibus et negligentiis meis, et pro omnibus circumstantibus...[Accept, O holy Father, almighty eternal God this immaculate host which I, your unworthy servant, offer to you, to my true and living God, for my countless sins, offences and negligences, and for all those standing by...]
What then does ''circumstantes'' refer to? Is it some theological ideal, or some last relic of a long forgotten practice of people crowding the priest at the Altar? I think it is a combination of both these things (without the crowding part), and refers to the ancient posture of liturgical prayer which is standing, symbolising the Resurrection. For the last two weeks I have retired to the congregation to watch (unmolested by the duties of holding a torch to greet the Elevation) the Liturgy and I confess to getting rather impatient with the whole stand, sit, kneel routine - which is the aliturgical consequence of having pews clutter up a liturgical space. Could you imagine the huge difference to the ethos of the Roman Rite it would be if we suddenly did away with pews? This way the Nave of the church could once again be a real liturgical space, free for liturgical processions (when I attended a Pentecost Vigil in a nearby church earlier this year I was rather annoyed that I couldn't join the Procession to the Font (in the wrong place) because of the pews), and the Deacon could go around the church with the thurible and incense each and everyone (and the other statues and images in the church) at the Offertory of the Mass, rather than the current practice of the Thurifer giving the lay people three simple swings from the gates of the Quire.
Regarding the stand, sit, kneel routine (which effects not only the lay people but also the Sacred Ministers and clergy in choir), I have never quite understood the three degrees of ''emphasis'' inherent in this strange custom. Apologists of the routine tell me that we stand for the Prayers and Gospel (rightly so), we sit for other ''less important'' parts such as the Epistle and Offertory prayers, and we kneel for such things as the Canon and Prayers for Requiems. Kneeling is very apposite in certain liturgical contexts (such as during Lent and Holy Week, the most solemn and serious days in the year), but I would personally do away with all kneeling on Sundays and during Paschaltide. Requiems are interesting - what is the idea behind kneeling for the Prayers at a Mass of Requiem? The sombre character of the Catholic Requiem Mass appeals to me aesthetically and liturgically. The Propers (is the Dies Irae not part of the Ordinary of the Requiem Mass?) express that we are grieved and torn to pieces by our loss, but that we too hope in the general Resurrection and the fathomless mercy of God, but does kneeling for the Prayers not compromise the balance that the Requiem encapsulates? I would rather the Prayers be sung standing, the attitude common to all Prayers, the idea expressing the reality of the Resurrection.
Sitting is simply not a liturgical posture of any kind, and as I have said, I would reduce any seats in a church to those lined against the wall for the benefit of those who simply cannot stand for long periods.
Posted by Patrick Sheridan at 12:34 pm
Email ThisBlogThis!Share to TwitterShare to FacebookShare to Pinterest