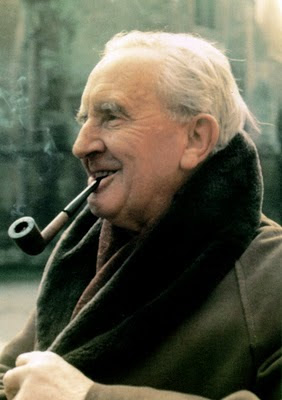 J.R.R Tolkien, my hero as you all know, read The Catholic Herald. I cannot recommend The Letters of J.R.R Tolkien enough - they are often very witty and intelligent. When Humphrey Carpenter and Christopher Tolkien were arranging these letters in the late 1970s, they couldn't possibly incorporate each and every letter from Tolkien's life, many of which were deeply personal or were related to business, publication and academia, and many were probably lost too. I'd like to get my hands on some more of the stuff from the 1950s and 1960s - and possibly arrange them into a coherent corpus like A Bitter Trial. Sadly, Carpenter knew little of the Catholic Church, and certainly an end note in the index of The Letters, in which he tries to explain what Tolkien meant by his reference to the changes brought about under Pius X being the ''greatest'' (I wonder what he meant by this?) that he or his sons would see in their lives, is misleading.
I would like to draw attention to this very amusing letter though, written to Christopher Tolkien on 11th February 1945 (and numbered 80 in the series Pater ad filium natu sed haud alioquin minimum):
''I've wasted some precious time this week-end writing a letter to the Catholic Herald. One of their sentimentalist correspondents wrote about the etymology of the name Coventry, and seemed to think that unless you said it came from Convent, the answer was not 'in keeping with Catholic tradition'. 'I gather the convent of St Osburg was of no consequence,' said he: boob. As convent did not enter English till after 1200 A.D. (and meant an 'assembly' at that) and the meaning 'nunnery' is not recorded before 1795, I felt annoyed. So I have asked whether he would like to change the name of Oxford to Doncaster; but he's probably too stupid to see even that mild quip.'' (The Letters of J.R.R Tolkien, no. 97).
Posted by Patrick Sheridan at 3:40 pm
Email ThisBlogThis!Share to TwitterShare to FacebookShare to Pinterest