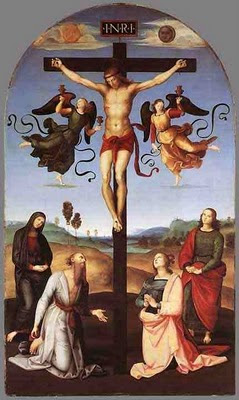 One of the greatest ironies of the Second Vatican Council was that it attempted to make the Church's traditional Liturgy more traditional. I could just about imagine Michael Davies, and many like him, turning red in the face at my saying that (those who advocated the unfounded notion that the Novus Ordo of Paul VI fell out of the sky on an unsuspecting episcopate!), but it is true. Just as Lumen Gentium attempted to ''moderate'' the Infallibism of Pius IX and the ultramontanist content of Pastor Aeternus (by ''sharing'' the infallibility of the Pope with the collective body of the Bishops), so Sacrosanctum Concilium attempted to ''reform'' the Liturgy within a more traditional periphery. The desire of reform surely indicates that the Rites were faulty in some way, or not doing what they were supposed to? I have often found that Traditionalist objections to certain elements within the New Rite (although I share some of them) are simply whinings for a return to Catholic Liturgy of the 1940s and 1950s - in the days when the Roman Rite was so far removed from Tradition that Low Mass and Benediction were the norm in most parishes. In fact Roger Martin, in his article Liturgy and Christianity, speculates that the only reason Traditionalists like traditional Liturgy (of a rather late vintage) is because, for them, it enshrines the old Scholastic system (I would elaborate and say that this applies more to Low Mass than traditional Liturgy, per se), in other words, it is desirous that churches have as many side-Altars packed into the Nave as humanly possible (following this logic, why not do away with the High Altar completely? What is the point of High Mass when all the Sacred Ministers and other persons involved in it could be saying private Masses at all those side Altars?), and it is also desirous that we have as much Benediction as we can get away with, etc, etc. Therefore, among other reasons, ''traditionalists'' aren't really traditional in any meaningful sense at all - they just pine after Catholicism of the second millennium with all its abuses and superstition.

Among the more traditional liturgical practices revived at the Second Vatican Council is the salutary custom of distributing Holy Communion under both kinds. In the early Church (in West and East), Communion was ordinarily administered under both kinds, indeed it was seen (rightly) as a matter of Divine precept. Our Lord plainly says: Drink all of this (Matthew 26:27), but the practice gradually fell into abeyance in the Roman Rite about a thousand years ago. In the Middle Ages there were certain revivalists like John Wycliff, the Lollards, the Hussites etc, who questioned the Church's discipline regarding the distribution of the Sacrament and advocated a return to a more traditional, biblical, understanding of Holy Communion, but these were all condemned as heretics, until the Council of Trent (1545-1563), in its ''do the exact opposite of the what the Reformers are doing'' attitude (how could the Catholic Church possibly be wrong?!), finally forbade the Chalice to all but the Celebrant at Mass. Another of the orthodox Articles of Religion goes: The Cup of the Lord is not to be denied to the lay-people: for both the parts of the Lord's Sacrament, by Christ's ordinance and commandment, ought to be ministered to all Christian men alike.

What, therefore, are the reasons that the custom of administering Holy Communion under both forms fell into abeyance in the West and why do Traditionalists wish to maintain this untraditional, and unScriptural, tradition? Like Low Mass it arose from theological speculation (and like Low Mass, I see the distribution of Holy Communion under the form of Bread alone, except in cases of extreme necessity, as a huge aliturgical problem - like lace cottas of course). Traditionalist apologists for the Bread Alone theory argue that the reason the discipline became crystallized in the West was because of dangers of profanation of the consecrated Sacrament. While this is an intelligible motive, it does not negate the greater issues at stake here - namely, whether the custom flies in the face of Divine ordinance, or even whether communicants under a single kind receive half the Sacrament. It doesn't do to be too concerned about profanation. I see this as a godless form of rubricism, sterility in the Liturgy, and extra-liturgical concern about the Blessed Sacrament. I would be more concerned about frequent Communion and people receiving unworthily, and certainly too often, as a form of profanation than if the Celebrant drops the Ciborium, or the Precious Blood is spilled on the mensa of the Altar. Accidents happen - I'm sure the Lord knows this!
Another Traditionalist argument for Communion under the form of Bread Alone is precisely that the older custom has been in abeyance for a thousand years in the Roman Rite, and that therefore a revival of the tradition amounts to little more than liturgical archaism (soundly condemned in Mediator Dei, aka Ego Liturgia sum, by Pius XII). But surely where a custom is wrong a revival of the more ancient and correct custom is praiseworthy? As Our Lord Himself said: unless you eat the flesh of the Son of Man and drink his blood, you shall not have life in you. (John 6:53). Whatever you might think of the whole ''but each communicant receives the Body, Blood, Soul and Divinity of the Saviour under a single kind alone, and so communicants who receive under both kinds receive nothing more than communicants who receive under a single kind'' theory (which is beyond the scope of this post) is unimportant. Anciently the Church in the West was more traditional in this regard, as in many others, but during the Middle Ages, because of questionable Scriptural exegesis, selective (and I daresay revisionist) Patristic commentary and Scholastic reasoning (is there anything meritorious about Scholasticism?), minimalism, centralization and Papal decree was seen as more important. If only the Council of Trent had hearkened to the Reformers in this, and a few other, respects - the Catholic Church could have prevented a major schism. Instead, the Catholic Church never being wrong, she decided to cling to the tradition and succeeded in merely perpetuating a huge error (rather like an ill-behaved child, after a telling off by her parents, sulkily going to her bedroom to brood, or even a solipsist nutcase content to think that everyone is else wrong except him). The Council of Trent arguably was the axe to the tree of traditional Liturgy (a Papal axe), which even in the Middle Ages was not totally dead and gone as it is now. Is there any surprise, then, that there was so huge a reaction against this mentality in the 1960s?

Of course, for advocating a return to a more traditional practice, Trads will just label me a Modernist, or even a Protestant (I have already been labelled a ''heretic'' on another blog for thinking that I am ''more catholic than the Pope''). How very sad that I am so poorly understood...
Posted by Patrick Sheridan at 2:00 pm
Email ThisBlogThis!Share to TwitterShare to FacebookShare to Pinterest