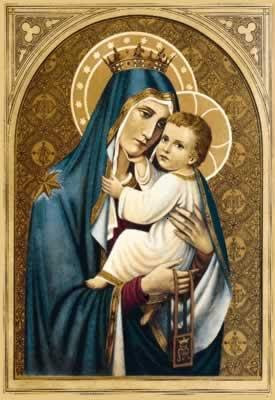 Rubricarius of the St Lawrence Press has put up an interesting post today about the Assumption (and I am flattered by the link to this small blog), which I encourage you to read. I also encourage you to read The Tridentine Rite (which is not used by him so liberally as by everyone else - it really is the rite of the Liturgy as it was in 1570), which, after the manner of the St Lawrence Press, gives a detailed outline of the Liturgy as it was yesterday, Sunday 2nd August (the Catholic Church used the Julan Kalendar until 1582). He mentions the alternative Collect Veneranda nobis, which I neglected to mention in my previous post, and two Epistles - something wholly new to me - used on alternate days throughout the Octave. Very interesting.
As I lay in bed last night thinking about the damnable heresies of Signum Magnum, and the implications of these propers for the doctrine of the Assumption itself, something struck me. Do ''traditional'' Catholics who use these propers year after year, and will continue to use them until they see reason, care more about what the Pope said in 1950, in isolation from the ancient witness to this doctrine of the Sacred Liturgy, or what the Sacred Liturgy itself has said for centuries? It seems to me that the will and whim of the Pope, whether he be right or wrong, matters more to contemporary traditionalists than the Sacred Liturgy. It is for this reason (and others) that I am not a traditionalist. I think that it is more expressive of the catholicity of the Church to use the old propers than using ones put together by pen-pushers in the Vatican in the lifetime of my grandparents - what better way of expressing that unison of belief and liturgy throughout the Church of all ages and places in the West than by using Propers so ancient and so beautiful? By using the modern ones you merely make deference to the reversal of the Lex Orandi by Pius XII, and you are in danger of heresy.
Munificentissimus Deus is not only wrong (you cannot arrive at the right conclusions where you get the arguments wrong) it is superfluous to Catholic doctrine - just another way of enhancing beyond his person the role of the Pope in the Church. It is not even about the Assumption, which is an ancient liturgical feast, it is about Papal authority to do what he wants. I believe in the doctrine of the Assumption because the Liturgy has bore witness to this doctrine a lot longer than the last 60 years of Papal teaching which has replaced Liturgy. It is shameful that no traditional church used Gaudeamus (if any readers know of any church that did, please leave a comment), and an absolute scandal.
I am reminded of this quote from The Lord of the Rings:
''At last, on the fifth morning since they took the road with Gollum, they halted once more. Before them dark in the dawn the great mountains reached up to roofs of smoke and cloud. Out from their feet were flung huge buttresses and broken hills that were now at the nearest scarce a dozen miles away. Frodo looked round in horror. Dreadful as the Dead Marshes had been, and the arid moors of the Noman-lands, more loathsome far was the country that the crawling day now slowly unveiled to his shrinking eyes. Even to the Mere of Dead Faces some haggard phantom of green spring would come; but here neither spring nor summer would ever come again. Here nothing lived, not even the leprous growths that feed on rottenness. The gasping pools were choked with ash and crawling muds, sickly white and grey, as if the mountains had vomited the filth of their entrails upon the lands about. High mounds of crushed and powdered rock, great cones of earth fire-blasted and poison-stained, stood like an obscene graveyard in endless rows, slowly revealed in the reluctant light.
''They had come to the desolation that lay before Mordor: the lasting monument to the dark labour of its slaves that should endure when all their purposes were made void; a land defiled, diseased beyond all healing - unless the Great Sea should enter in and wash it with oblivion. 'I feel sick,' said Sam. Frodo did not speak.'' (The Lord of the Rings, Book IV, Chapter II).
Of course, like Wren's tomb in St Paul's Cathedral, if you seek the monument to Pius XII, you merely have to look about you...
Posted by Patrick Sheridan at 1:37 pm
Email ThisBlogThis!Share to TwitterShare to FacebookShare to Pinterest