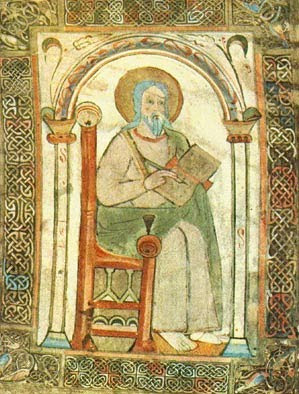 As you all know, I am terribly fond of St Bede. Well today (according to the Gregorian Kalendar mind you) is the feast of St Aidan of Lindisfarne (died 31st August 651), who came from St Columba's monastery at Iona at the invitation of King Oswald of Northumbria, in order to preach the Gospel and found a monastery at Lindisfarne. St Bede describes this holy man lovingly in the Ecclesiastical History:
He [king Oswine] had given Bishop Aidan an excellent horse so that, though he was normally accustomed to walk, he could ride if he had to cross a river or if any other urgent necessity compelled him. A short time afterwards Aidan was met by a beggar who asked him for an alms. He at once alighted and offered the horse with all its royal trappings to the beggar; for he was extremely compassionate, a friend of the poor and a real father to the wretched. The king was told of this, and, happening to meet the bishop as they were going to dinner, he said: ''My lord bishop, why did you want to give a beggar the royal horse intended for you? Have we not many less valuable horses or other things which would have been enough to give to the poor, without letting the beggar have the horse which I had specially chosen for your own use?'' The bishop at once replied: ''O King, what are you saying? Surely this son of a mare is not dearer to you than that son of God?'' After these words they went in to dine. The bishop sat down in his own place and the king, who had just come in from hunting, stood warming himself by the fire with his thegns. Suddenly he remembered the bishop's words; at once he took off his sword, gave it to a thegn, and then hastening to where the bishop sat, threw himself at his feet and asked his pardon. ''Never from henceforth,'' he said, ''will I speak of this again nor will I form any opinion as to what money of mine or how much of it you should give to the sons of God.''
When the bishop saw this he was greatly alarmed; he got up immediately and raised the king to his feet, declaring that he would be perfectly satisfied if only the king would banish his sorrow and sit down to the feast. The king, in accordance with the bishop's entreaties and commands, recovered his spirits, but the bishop, on the other hand, grew sadder and at last began to shed tears. Thereupon a priest asked him in his native tongue, which the king and his thegns did not understand, why he was weeping, and Aidan answered: ''I know that the king will not live long; for I never before saw a humble king. Therefore I think that he will very soon be snatched from this life; for this nation does not deserve to have such a ruler.'' Not long after, the bishop's gloomy forebodings were fulfilled in the sad death of the king which we have already described. Bishop Aidan only lived for twelve days after the murder of the king whom he loved; for he was taken from the world on 31st August and received from the Lord the eternal reward of his labours.
St Aidan of Lindisfarne, pray for us.
Posted by Patrick Sheridan at 11:25 am
Email ThisBlogThis!Share to TwitterShare to FacebookShare to Pinterest