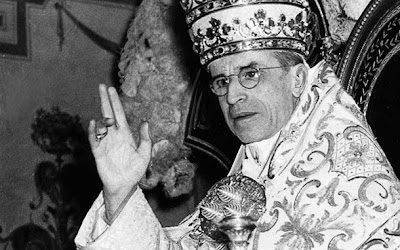 Quibus Eutyches, qui presbyterii nomine honorabilis videbatur, multum imprudens et nimis imperitus ostenditur, ut etiam de ipso dictum sit a propheta: Noluit intelligere, ut bene ageret; iniquitatem meditatus est in cubili suo. (St Leo, Tomus ad Flavianum, 449).
It has come to my attention that some people think I am a schismatic, or even a heretic. I'd be interested to know what kind of ''heretic'' - clearly not the liberal modernist kind (my views are apparently too extreme for that), so what? The general consensus seems to be ''I can't work you out - therefore you must be a heretic'', am I right? Or are my views about the Papacy perhaps misunderstood? If so, which views? Do I think that Popes have the authority to tamper with the liturgical traditions of the Roman Church at their whims? No. Do I believe that Popes have authority to talk nonsense about the Assumption in isolation (and even antipathy towards) from Liturgy? No. Do I think that the Signum Magnum propers are worthy of a thousand anathemas? Yes. Do I believe that Pius XII was a heretic? Denonstrably yes, and much worse.
Perhaps we have enough to be going along with here, but it will be interesting to see what response (if any) I get to this post. It is an honest question, and there are no ''barbs'' attached, so comments are welcome. 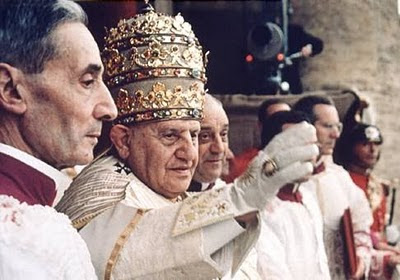 Two very different popes here. John XXIII is my favourite 20th century pope, if only because of the humility of his background, and person. Although I have to say what interests me most about this photo is Mgr Dante, Papal Master of Ceremonies from 1947 until I can't remember when (1965 I think) - didn't he see a great many changes!
Posted by Patrick Sheridan at 11:22 pm
Email ThisBlogThis!Share to TwitterShare to FacebookShare to Pinterest