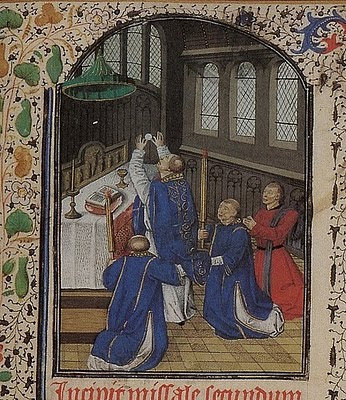 Last night I picked up my copy of Volume I of The Celebration of Mass (1941 edition), by J.B O'Connell and flicked through it to while away an hour. O'Connell was a master of the rubrics, but clearly the world's biggest bore, and part of the problem of 20th century Catholicism. The Celebration of Mass is an indispensable work, but I find it at once incomparably tedious and a tad depressing. It reads very much like the instruction booklet about how to work a complex piece of machinery, or even a railway timetable (the very things Fortescue criticised Dale for!). For example, turn to the section about ''liturgical law'' and he cites several sources, and lamentably names the so-called ''code'' of Canon Law as the principle source, the rubrics of the liturgical books (this is reasonable enough), the decisions of the S.R.C (Good Lord, I think I shall reach) and lastly legitimate custom. He then gives a list of the liturgical books, and gives various definitions and explanations about ''typical'' editions etc, being submitted to the S.R.C for approval, Imprimaturs etc. He then gives a brief history of the Roman Missal which is very interesting, and curiously mistakes the role of the Subdeacon in the early Church. It is curious that the Subdeacon now chants the Epistle - this is a late addition to his office, and probably some residue of the fact that, like the Diaconate, with the spread of Low Mass the offices of the Diaconate and Subdiaconate became gradually curtailed, and therefore less important, and so his chanting of the Epistle was added at some point to give him ''something else to do.'' This is my supposition and I may be entirely wrong of course.
The subsection about the Rubrics is again interesting, at least from a canonical and legal perspective. He goes through various moral questions etc, definitions of substantial, accidental, perceptive, directive rubrics etc, and it's at this point that I got rather angry, and probably the reason I hate this book. Is this what Liturgy is all about? Decisions of the Sacred Congregation of Rites (or whatever it's called these days) and Canon Law? I have no doubt that observance of the rubrics is important, not least for moral reasons and for the maintenance of liturgical decorum, but there comes a point when life, spirit and truth are sapped from the Sacred Liturgy because of rubricism - and this is exactly what happened in the 20th century, if not before, in the Roman Church. Liturgy became reduced to decrees from Rome, laws, meaningless (and in some cases obsolete) rubrics etc. No wonder there is such a liturgical crisis in the Church as is now! There is a fine line between laws there to safeguard the mystery, and laws for the sake of law. Such a disposition towards Liturgy clearly paved the way to ''whatever Rome says goes'', and haven't we suffered enough of what Rome says these last 60 plus years?
Posted by Patrick Sheridan at 12:51 pm
Email ThisBlogThis!Share to TwitterShare to FacebookShare to Pinterest