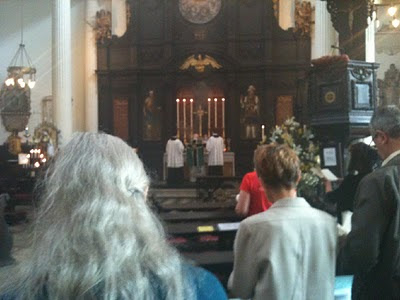 Sunday Mass at St Magnus the Martyr was out of my experience. It was the first vernacular Liturgy I had attended in literally months, although most of the Ordinary was in Latin. The Propers were chanted to an English plainsong melody, which sounded rather nice. The Hymn was ''bouncy,'' and not really to my taste (or some others seemingly). Before the Prayer, the Celebrant said: The Lord be with you, to which the congregation replied: And with thy spirit - an accurate rendering of et cum spiritu tuo, of course. The Prayers were read from the English Missal, and at the Sedilia, which is at variance with the Roman praxis at a Sung Mass (and High Mass) of the Celebrant standing at the Epistle corner of the Altar, but the English was of an archaic and more courteous mode (much nicer than the mistranslations of ICEL). There were three Scripture readings, a revived ancient practice though using the modern Roman lectionary cycle. The lessons were read by a layman at a pulpit outside the Sanctuary, and the Gospel by the Celebrant in the same place. The Symbol of Faith was sung in English, to a melody I am not familiar with (though I thought it rather catchy). Curiously the Chalice, burse etc were brought to the Altar at the Offertory by the Master of Ceremonies (Roman praxis for a Sung Mass is for the Chalice to be arrayed on the spread corporal in the centre of the Altar with the burse on the Gospel side between the Altar cards - only at High Mass is it brought from the Credence table by the Subdeacon).

A hymn was sung at the Offertory. The Orate Fratres and Suscipiat were both said allowed and in English. Curiously the Preface was read and not sung (there may have been a non-liturgical reason for this), although the Sanctus was sung. I don't know whether the Celebrant read used the Roman Canon or not. There were two Torchbearers to greet the Elevation. The Domine non sum dignus was said only once, and by all the congregation with the Celebrant. I was delighted to see Communion administered under both kinds, which seemed to work rather well. The Celebrant adminstered the sacrament under the form of bread, as the MC held a communion plate beneath the chin of communicants, who knelt, and a senior server administered the Chalice, and wiped it with a purificator. If only this salutary custom could be integrated into Roman High Mass. Communion under both kinds is something I have felt strongly about for years.

After Mass I had a chance to properly look around the church, which I hadn't visited for many years. I was glad to see a statue of Our Lady of Walsingham - all too many Catholics are fond of foreign saints and shrines, such as the Curé of Ars and Lourdes when there is nothing wrong with English piety. Walsingham is older than Lourdes, and old English saints are just as holy and heroic as continental ones. At any rate saints from the first millenium seem more ''real'' to me. I was also glad to notice that the sacrament is not reserved at the High Altar but at a side altar with a nice altar piece - which is more traditional. I was made very welcome at St Magnus the Martyr and will certainly go there again.

Before I went home someone asked me my opinion of vernacular Liturgy. I don't think it's the worst thing in the world. The absolute worst thing you can do liturgically (other than use the liturgical books of 1962) is face the wrong way, which they certainly don't do at St Magnus. I think that half the problems of the modern Catholic Church would be alleviated if they followed the example of the Anglo-Catholics at St Magnus - have the Old Rite...in English, if you so desire. I prefer Latin liturgy myself, but English is not as big a threat to Tradition as some things are - such as turning your back on the East, or using modern inferior propers for the Assumption.
Posted by Patrick Sheridan at 1:40 am
Email ThisBlogThis!Share to TwitterShare to FacebookShare to Pinterest